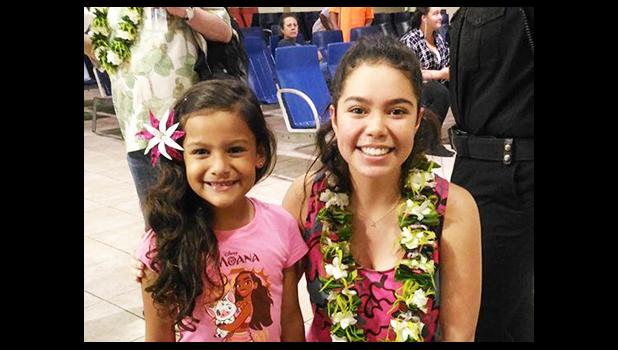 Apia, SAMOA — Samoa will have a special treat before the holidays as Auli'i Cravalho, the voice of Moana, and Ron Clements, John Musker and Osnat Shurer the filmmakers of Disney animated Moana will be in Samoa on Wednesday (Samoa Time).

There will be a special Screening of Disney's MOANA at Samoa’s Cinemas on the same day. According to Dionne Fonoti a local contact for Disney, the team of researchers, started their trips to Samoa from 2011- 2016 in the lead up to the making of MOANA.

“This particular trip is to personally thank the Samoan government and people for all the support of the film as different people, like me for instance, have been involved since the beginning.

“So the special screening on Wednesday is to officially share the film with Samoa and express the deep gratitude and respect of the filmmakers and Disney to our people,” says Fonoti.

According to the Moana press kit, sent to Samoa News, Walt Disney Animation Studios’ “Moana” is a sweeping, CG-animated feature film about an adventurous teenager who sails out on a daring mission to save her people.

“Moana is the 16-year-old daughter of the chief of Motunui. She’s brave, determined, compassionate and incredibly smart. She has a never-say-no attitude and a profound connection to the ocean,” says director Ron Clements. “So it’s troubling to her, to say the least, that her people don’t go beyond the reef surrounding their island,” adds director John Musker.

The press kit says that the story is inspired in part by oral histories of the people and cultures of Oceania, where filmmakers traveled to learn as much as possible. “For centuries, the greatest navigators in the world masterfully navigated the vast Pacific, discovering the many islands of Oceania. But then, around 3,000 years ago, their voyages stopped for a millennium — and though there are theories, no one knows exactly why.

“Navigation — way finding — is such a big part of Pacific culture,” says Musker. He said there are many theories, but no one is certain about what may have led to the 1,000-year gap in exploration before it resumed 2,000 years ago, leading to the discoveries of Tahi, Hawai‘i and Aotearoa (New Zealand). This rebirth — and the possible explanation behind it — sparked the filmmakers’ imaginations.

“In our story, our heroine, Moana, is at the heart of the rebirth of way finding.” says Musker.

Clemens says that “Ancient Polynesians found their way across the seas, way finding island-to-island without the use of modern instruments, using their knowledge of nature, the stars, the waves and the currents. We heard many messages from the people we met during our trips to the Pacific Islands that the ocean doesn’t separate the islands it will connect them. Voyaging is a real source of pride for Pacific Islanders, a part of their identity. They were, and continue to be, some of the greatest explorers of all me. This way finding sense is not only quite sophisticated, it is miraculous.”

According to Lasseter many of the people Ron and John met explained that this belief stems from the deep pride Pacific Islanders have in their ancestors, who were the greatest navigators — way finders — that the earth has ever seen.

“That pride in their cultural traditions, that sense of connectedness to the ocean, and by the ocean, became central to the story. It’s why the story’s protagonist, and the film itself, is named ‘Moana’ — the word for ‘ocean’ in many Polynesian languages,” he said.

According to Fonoti, this Thursday (Samoa Time) the National University of Samoa Centre for Samoan Studies will be hosting the filmmakers, Clements, Musker and Shurer who will be presenting an Animation Master class, and sharing some of their behind-the-scenes journey in the making of MOANA.
This Seminar is open to the public and press.