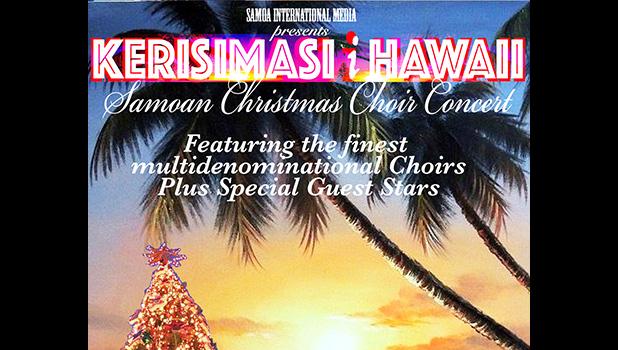 Honolulu, HAWAII —  Samoa International Media is proud to announce the inaugural 1st. Annual “Kerisimasi i Hawaii” concert.  Kerisimasi is a multi-denomination Christmas Choir Concert to be held at the Kanana Fou Church, (94-261 Kunia Rd. Kunia/Waipahu), on Sunday, December, 8th 2019 at 5:00pm. The public is invited, Admission is Free.

The Kerisimasi i Hawaii Concert is a Christmas musical event for our Samoan-Hawaiian  community.  Choirs are invited and each will perform 2 Christmas songs in their own native Polynesian language. Part of the Christmas concert is to perpetuate and promote Polynesian language and culture through music.   “Kerisimasi i Hawaii” will showcase the finest and largest Samoan and Tongan church choirs in Hawaii along with several iconic Hawaii entertainers such as Melveen Leed and Samoas’ recording artist Dennis Ah Yek to name a few.  The invited  church choirs are from, the Assembly of God, Congregational Christian Church of Samoa, Samoan Seventh Day Adventist Church, Church of Jesus Christ of Latter Day Saints (Mormon), and Agape International.    The concert will be filmed for television to be rebroadcast in Hawaii, Samoa and American Samoa during Christmas time.

“Kerisimasi i Hawaii” concert, will also honor Soloalii F. Faalepo, the recently retired Director of the American Samoa Government Office in Honolulu with a “Samoa Living Treasure Award”.  After serving the Samoa-Hawaii community for almost 50 years, as Director and host of  “Samoa Mo Samoa Radio Program” (KNDI Radio 1270AM), and Television, sadly, he finally succumbed to a devastating illness, Alzheimer.  His extraordinary service as the Voice of Samoa on Radio and Television in Hawaii for half a century is unprecedented and legendary.  He founded the Samoa Mo Samoa Radio program almost 40 years ago, and still serving the Samoan community up to now, out of KNDI Radio Station 1270AM, Honolulu, making it the longest running Samoan Radio show in the USA.  He served under four American Samoa Governors/Administrations.  When Daniel Sataraka, a veteran international journalist was asked about Soloalii, he said, “Without any doubt, no one has contributed more for the betterment of Samoans in Hawaii than Soloalii Faalepo”.  During major natural disasters in both Samoa, the South Pacific, and Hawaii, Soloalii provided calming leadership on radio, where Samoans got their vital news and information in their own language.  The Samoan music industry owes a lot to Soloalii for his support and promoting of Samoan music on Radio for decades.  While many sought the spotlight and attention of their work, Soloalii worked quietly without much fanfare providing crucial media services for the Samoan  community, and many are unaware that his community work were largely philanthropic in nature.