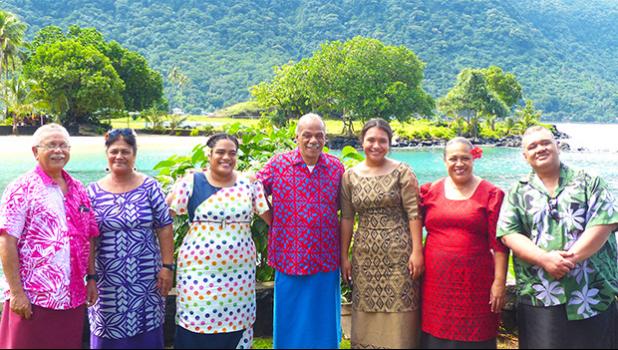 Pago Pago, AMERICAN SAMOA — Two ASCC students and their parents along with Department of Marine and Wildlife Resources director, Va’amua Henry Sesepasara and Western Pacific Regional Fishery Management Council local official Nate Ilaoa came together for the official announcement that the two are the recipients from American Samoa for the 2019-2020 US Pacific Territories Fishery Capacity-Building Scholarship, which is awarded by the Western Pacific Regional Fishery Management Council to students from American Samoa, Guam, and the Commonwealth of the Northern Mariana Islands.

Fuamai Ativalu Tago from Nu’uuli, and Alphina Sifaleula Liusamoa of Manu'a, are graduating next month from ASCC. Thereafter, they will head out to the University of Hawai’i at Hilo, to major in Marine Science. Upon earning their degrees, the students will return home to work for a certain period of time at DMWR as part of the scholarship program.

This is the first time that American Samoa has had two students selected for the scholarship award in one academic year.

The Council and its Education Committee announced early this year the availability of up to three scholarships for academic year 2019-2020. The scholarships support the aspiration of American Samoa, Guam, and CNMI to build their capacity to effectively manage their fisheries and related resources through employment of their own people.

The scholarships cover the costs of tuition and fees, and some living expenses.