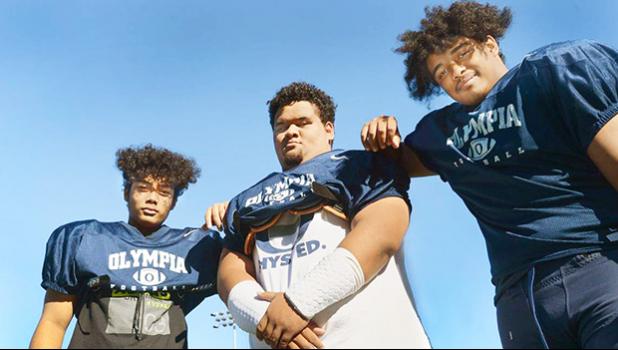 Olympia, WASHINGTON — Kahalua Tuitele was born in Seattle but moved to his parents’ native American Samoa a year later.

When he returned to Washington a year ago, Tuitele not only quickly became a star for the Olympia High School football team, earning all-area honors as an offensive lineman, he joined two cousins on the Bears’ roster.

The results have been positive for Olympia, winners of its last two games after a slow start, with a Tuitele in each class. Kahalua is a two-way senior lineman. Keoani is a junior defensive end. Max is a sophomore linebacker who occasionally carries the ball in tough yardage situations on offense.

“They’re from a great football family,” said Olympia coach Steve Davis, who recalls coaching more members of a single family over a period of years, but never three key contributors at once.

Max and Keaoni’s dad, LJ, is a longtime coach in Thurston County Youth Football. Their little brother is in seventh grade, planning to play for Olympia. Another cousin, Jordan Randall, played for Capital a few years back and still another, Peniamina Mapu, is currently a wide receiver and safety at River Ridge.

Getting involved with the sport was natural.

“I was always around football, watching my older cousins play. We used to come to the Oly-Capital Spaghetti Bowl games,” Max remembered. “I fell in love with it at a young age.”

Kahalua’s older brother, Kobe, plays for Allan Hancock Community College in Southern Calfornia. Kahalua visited Washington a few times growing up but had adjustments to make when he decided to stay.

“The weather’s so different. The football is a lot higher quality than in Samoa,” he said. “It was good to have Keaoni and Max on the team. They gave me guys I was used to talking to while I was slowly getting to know my other teammates.”

All three said the experience of playing with relatives is a plus with no real negatives.

Read more at The News-Tribune