Stranded Samoans from Alaska get to fly out on FEMA flight 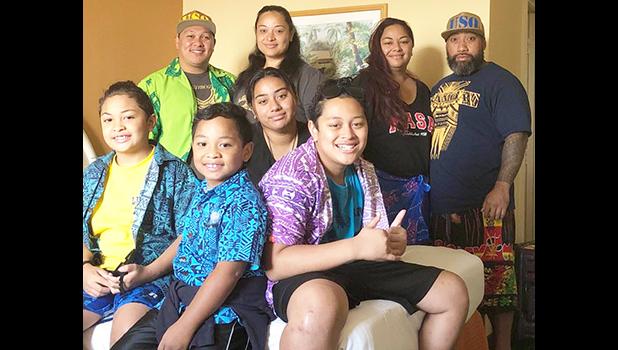 Pago Pago, AMERICAN SMOA — This courtesy photo provided to Samoa News shows two Samoans families — last names Keil and Mano along with their children — at a Hawai’i hotel yesterday morning before their 3p.m. flight to Alaska, after being uplifted Tuesday afternoon on a US Navy aircraft from American Samoa, where they’ve been stranded since late March when flights between Pago Pago and Honolulu were suspended.

A local resident told Samoa News that the two Samoan families from Alaska stayed for free at the hotel and their flight from Honolulu to Alaska was courtesy of Alaska Airways. The families were uplifted on the flight from American Samoa to Hawaii, based on a request by US Sen. Lisa Murkowski of Alaska.

The military plane was a US Federal Emergency Management Agency (FEMA) flight.

ASG coronavirus task force chairman Iulogologo Joseph Pereira said yesterday morning that a majority of the passengers when the FEMA flight departed were local patients and their escorts. He explained that the other passengers were Alaskan residents, who Murkowski “pushed to be brought on the FEMA flight.”

He said those who came on the flight included Congresswoman Aumua Amata and FEMA replacement personnel. (See yesterday’s Samoa News edition for Amata’s news release on her visit).

Samoa News understands that there were about 40 passengers on the outbound flight, which included the patients on the medical referral program and their escorts, along with military personnel.

Reports from Pago Pago International Airport state that there were a lot of people at the airport to say farewell to the departing passengers.