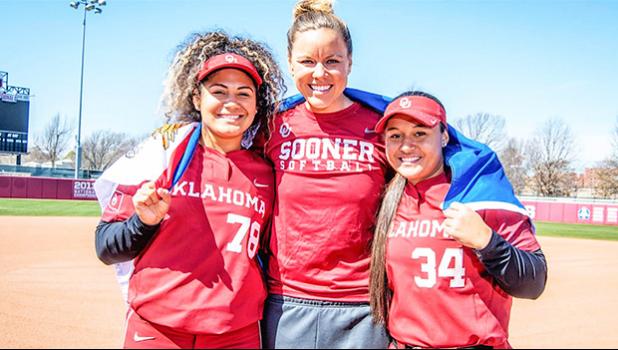 Norman, OKLAHOMA — The last week of April, the Oklahoma softball team traveled north for a three-game series against Iowa State. While they were there, Iowa State assistant volleyball coach Fiona Fonoti, who is of Samoan descent, made it a point to introduce herself to OU senior Falepolima Aviu, who is also Polynesian.

“Wherever you are, whatever state you’re in, your Polynesian people will find you, and it’s cool knowing that you have people everywhere,” Aviu said. “Especially coming out here, I was nervous because I didn’t know anybody, I didn’t even know if there were Polynesian people in Oklahoma, but then I’ve become friends with so many people.”

Within the OU softball program in particular, sharing a Polynesian identity has been a bonding experience for many members of the team and staff, centered around Aviu, sophomore Jocelyn Alo and volunteer assistant coach Keliani Ricketts. They say it’s like a family within a family.

“My sister (Samantha) was here, as well, and so that was something important for me, choosing to go somewhere that felt like family,” Ricketts said. “Then you start to see a few more Polynesian girls come to Oklahoma and feel the same thing, that there’s a sense of family here.”

That closeness is an important aspect of Polynesian culture, both within individual families and in the larger society as a whole.

“The Polynesian culture is really all about love and respect, and it’s really family oriented, respecting one another,” Aviu said. “Everybody’s got your back, it’s definitely a support system.”

“I would say the Samoan culture is a really welcoming culture,” Alo added. “We always put our family first in everything we do…We root for each other.”

Recently, several members of the team all made their way to Aviu’s family’s house in Fullerton, Calif., where she hosted a big barbecue. It helped the team grow closer together as a group, but it also helped demonstrate that family-style encouragement in a tangible way.

“It was cool because my aunts and uncles were there helping out, it wasn’t just my mom and dad, and that’s the Samoan culture; everybody helps everybody.” Aviu said. “It’s like the family within the family we already have here on the softball team. They understand the culture, they understand you’re playing not just for yourself but for your family, and they’re always there to support you.”

“It’s really cool for a little Samoan girl to be able to look up and see how many great Samoan athletes there are in our sport and be an inspiration to them,” Ricketts said. “And with softball, I’m biased, you know, but I think it’s a great sport for Polynesian girls to be a part of because you can be big and strong.”

“Fale set a good example for myself on how things need to be run and how things need to be on and off the field, and I feel that it’s my responsibility to set that example not only for the other Polynesian girls, but for the rest of the team as well,” Alo said. “They don’t really know the platform that they have until they get here…people are listening, people are watching, especially because they want to be like us one day.”

As the Sooners continue to advance through the postseason, the skills and relationships the team has developed over the course of the year become more and more important, and so, too, does having that family within a family.

“On the field, it’s a warrior mentality, but off the field, it’s all love, supporting one another through anything,” Aviu said. “This is your family. These are your sisters sharing your Samoan culture.”

These three Samoan women are representing the territory on the softball field at Oklahoma, an NCAA Division I school.

Falepolima Aviu is a senior at Oklahoma and will be graduating this year, after which she will be passing the torch to the "next generation of Sooner Samoans".  She is the daughter of William and Patricia Aviu of Oceanside, CA and Fagasa, AS.

Jocelyn Alo is the daughter of Levi "Keala" and Andrea Alo of Hau'ula, HI.

And then there is legendary volunteer Assistant Coach, Keilani Ricketts, daughter of Jeff and Carol Ricketts (Ripley and Gabbard family, Leone, AS) and wife of Sean Tumanuvao.