This Son of Samoa is cooking in style in the U.S. mainland 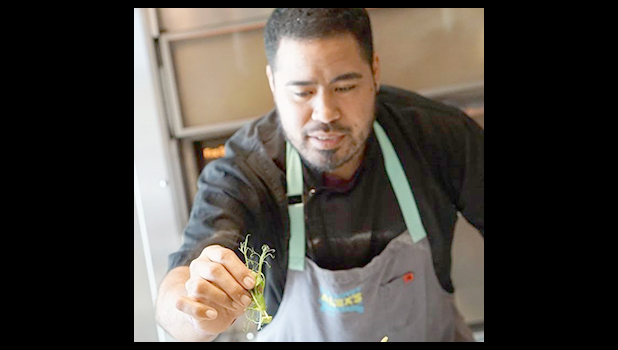 Sacramento, CALIFORNIA — One of Sacramento’s favorite chefs is also a ‘favorite son of Samoa’.  Chef Muagututia Tuala-Tamaalelagi is taking part in Farm to Fork Challenge of the Chefs, Wednesday, Oct. 30 in Cali’s capital city.

Over the weekend, Chef T shared with Samoa News that his first culinary training started in Samoa in 2003, describing himself as a “proud graduate” of Samoa Poly Technique (Tourism and Hospitality) in Vaivase.

“I also received a scholarship and had my training paid in full by the Samoa Government programs, while attending SPT,” he revealed. “Although, I was born and raised in American Samoa, I am deeply rooted in Samoa.”

When interviewed for the event last week he said he has been in the food biz professionally for 9 years, however he credits his Samoan culture and heritage — where men do the cooking — for a lifetime of experience.

Some of his favorite ingredients for his fresh, wholesome recipes also stem from his life in Samoa — coconuts and fish.

Along with the friendly competition among the hotel chefs and their culinary teams, the event will feature the freshest and most beautiful bounty the Sacramento Valley has to offer.

Tuala-Tamaalelagi is the Executive Chef of The Sacramento Marriott Rancho Cordova and you're invited to join him when you're in the area.