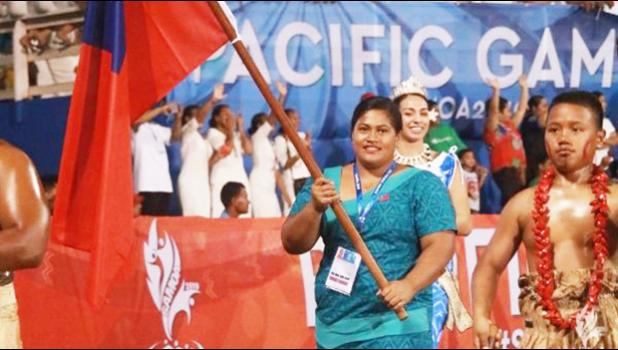 The Opening Ceremony at Apia Park Stadium in Samoa's capital city was broadcast internationally, and was the first Pacific Games opening event to take place on a Sunday. Despite heavy rain earlier in the day, the weather remained dry for the evening, and the three-act ceremony attracted large crowds, some of whom arrived two hours before the event.

Excited athletes from the 24 competing countries opened proceedings with the parade of nations, some performing a short traditional dance, wearing traditional dress as they moved through the packed arena.

The Prime Minister of Samoa, the Honorable Tuilaepa Sailele Malielegaoi, gave the opening keynote address, speaking of the "catalyzing impact of sport".

He thanked the Pacific Games Organizing Committee, sponsors, volunteers, and workers who "have worked very hard over the past 14 months to make this day a success".

"I applaud the dedication of our public service, government corporations, private sector and especially our people who have risen to the occasion. You have exceeded all expectations."

The Games were then officially declared open by Samoa's head of state, His Highness Tuimalealiifano Vaaletoa Sualauvi II.

Following the formalities, a dazzling display of Samoan culture featuring 3,000 student performers from 16 secondary schools was led by the Ministry of Education, Sports and Culture (MESC).

It culminated with the entrance of the Games torch, which has travelled around Samoa for the past two weeks, carried by school children encouraged by jubilant communities cheering, dancing and singing as it passed through their villages.

The flame cauldron was lit by Samoan weightlifter, Ele Opeloge, and then a 20-minute firework display finished the event.

“I really enjoyed tonight’s event. I have seen so much of the Samoan culture from the Opening Ceremony. Tonight was so amazing and I have learnt a lot of things,” said Shaerack Dimodhy from Team Solomon.

Planning for the ceremony began last year, with MESC using the Games slogan, 'One in Spirit', to develop the overall concept of the production.

The Samoan legend of Leatiogie and his father Fe’epo, and the ancient game of Aigofie were woven throughout the ceremony.

"The story portrays the spirit of blessings. The legend tells of how a son sought the blessing of his father before leaving for battle," said MESC Assistant CEO, Papali’i Peone Fuimaono Solomona.

"It portrays many parts of our Samoan identity and spirituality…our ancient warrior spirit and the importance of being blessed before we set forth to fight and conquer."

The legend was selected as the winning concept from the annual festival, Samoa Ne'i Galo, last year.

Since early 2018, MESC has worked hard to use the regional stage to convey the message of unity.

"There are many issues facing our region which require us to be united. The narrative calls for us all to be one in spirit to address these challenges," said Fuimaono.

Rehearsals for the ceremony began in early 2019. In April, a team of choreographers and trainers returned from a three-week training program in Hunan, China, where they learned about calisthenics and the technicalities involved in a large-scale production.

The shows include large props designed in Samoa and manufactured in China, adding another dimension to the overall production. A firework display, courtesy of the Government of the People’s Republic of China, concluded the show.

The Games begin on Monday 8 July with 11 sports and the first medal event - open water swimming. Selected sports will be broadcast and live streamed from 9am on Monday including basketball and rugby league 9s on the opening day.