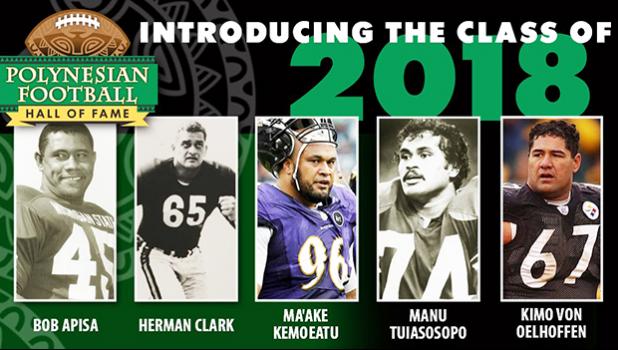 The Polynesian Football Hall of Fame unveiled its Class of 2018 this week. Five Inductees were selected from a list of 18 Finalists.

“This year’s class represents three Super Bowl Championships, two All-Americans, two College Football National Championships, and a member of the NFL’s Half Century Team,” said Jesse Sapolu, Polynesian Football Hall of Fame Co-Founder and Chairman. “Their accomplishments on and off the field make each of them truly worthy of this recognition.”

The Class of 2018 will be honored during the Polynesian Football Hall of Fame Enshrinement Weekend to be held on January 19 & 20, 2018 in Oahu, Hawai`i. The Polynesian Pro, College and High School Football Player of Year honorees will be announced later in the year.

Inductees will also be recognized at the inaugural Polynesian Bowl, a premier senior high school all-star football game featuring the world’s elite players of Polynesian heritage and other ancestries. For more information about the game, visit www.PolynesianBowl.com.