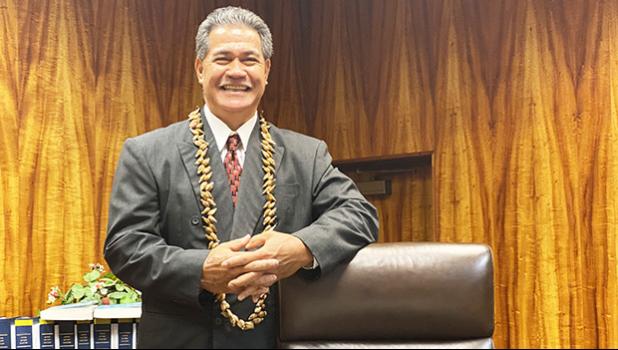 Washington, D.C. — Judge Faauuga Toʻotoʻo has been retained for another ten-year term as Judge on the Circuit Court of the First Circuit in Hawai’i.

Sunday, Congresswoman Aumua Amata welcomed the news saying, “Congratulations to Judge Faauuga Toʻotoʻo on this prestigious position and important responsibility. He is one of our own from Nuuuli. He is highly qualified and experienced, and his retention is the right decision. I know he will continue doing a great job, and being a credit to American Samoa.”

The judge’s mother was Paia Tago of the Tago and Lavatai family of Nuuuli as well as the Poloa family of Leone, and his father, Laititi Toʻotoʻo of Olosega.

The judge graduated from Leone High School in 197.,

Since 2010, he has served as judge on the Circuit Court of the First Circuit. This includes the domestic violence calendar, and a broad array of felony cases, including murder, assault, robbery, burglary, and many more. He also served as a substitute justice for the Supreme Court of Hawaii, participating in the oral argument and decision of the rail litigation.

Beginning in 1994, through his 2010 appointment to the next level court, he served as judge on the District Court of the First Circuit, where he presided over the criminal, traffic, drug, domestic violence, and civil calendars.

Prior to becoming a judge, he served ten years as Deputy Prosecuting Attorney in Honolulu, where he led cases of a broad variety, including felony jury trial cases and murder cases.