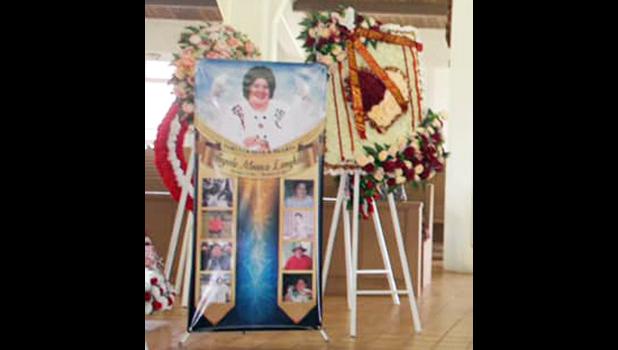 Source: Angela Langkilde's family
Pago Pago, AMERICAN SAMOA — Angela Monica Falasamoafalaulaula Langkilde, better known as “Angie”, was born on December 24, 1963 in American Samoa. She was the fourth child of Marcus and Marie Langkilde’s five children. Being the baby of the family for 7 years, she insisted that her parents call her Angie Baby even after her younger brother was born. From this she received her nickname, “Angie Pepe”, known to her family and friends, and her nieces and nephews who loved and called her this affectionately.

Angie attended St. Francis Elementary School in Lepua for most of her primary education. She later attended Mid- Pacific Institute in Hawaii for a short time but returned home because she was homesick. For High School she attended Fa’asao all girls school and graduated a proud Cougar in 1981.

Upon completing her High School studies, she focused on honing her golfing skills. She competed in several golf tournaments and became a Golf Pro. Although Angie loved pursuing her golfing passion in tournaments, she longed to return home to her family. When she returned home she became a Golf Instructor and manager at our local Golf Course.

As a Golf Course instructor she shared her passion with the youth as a golf coach for the Junior Golf Association and a mentor at the Upward Bound program at ASCC.  She would later devote herself to managing her family business, M&M Langkilde Gas Station and Tire Center, in Fagatogo. It was there, while working along side her father, that she gained skills and work ethic that would carry over in all aspects of her life. She was later offered a position in our local government as a Stadium Manager at the Sports Complex.  Angie enjoyed the work that she did there. It served as an outlet for her love of sports and meeting and getting to know new people.

Angie was athletic and shined in whatever sport she played. Angie excelled in basketball, bowling, softball and especially in golf. At the age of 12, Angie won the Jr World Championship in 1976. After she won, people asked where American Samoa is, Angie put our small island on the map. When Angie returned to American Samoa after winning the Junior World 11-12 championship at San Diego, she and her teammates received a royal welcome.  Angie went on to win and defend her title as Junior World Champion two more times in 1977 and 1978.

Angie was fiercely protective of her family and friends. Surely, anyone who was close with Angie has stories to share of her threatening or beating up anyone that crossed them. Angie loved and cared for her siblings’ children as her own and she was like a second mother to all of them. As her siblings' children had children of their own, she became the doting grand aunt who spoiled all them even more than their grandparents would. It was from her nieces and nephews that she received her name of endearment, "Ankie Ankie".

Angie loved her family and took pride in being a “Fagatogo Girl”. She would often say “My puke is buried in Fagatogo. I’m a real Fagatogo.”. She loved her time of living in Fagatogo at Aunty Anoi’s “Bachelorette Pad” where they spent late nights laughing, telling stories and probably getting into trouble that is better left unsaid -especially in church.

Angie was loved and adored by all who knew her. She had a warm personality, a contagious laugh and funny sayings like "Buffit" and "yeah, baby!" that put a smile on your face. Angie loved telling stories and was known for adding a lot of “flavor” to her stories with hilarious exaggerations. We will miss your stories, Buffit. Her family reminisce on how "naughty" Angie was. She would have her nieces, nephews, grandnieces and grandnephews sneak her sweets and goodies when no one was looking.

Angie was generous and kind hearted.  Whenever anyone needed assistance, they only needed to ask. Angie was abundantly blessed and she gave abundantly.  Whatever Angie had, she shared with others. The Chikami Family are very close friends of hers and are in the purse seiner business.  When the ship would dock they would offer fish, and she would accept with the intention to give it away.  She was known to park her car in Fagatogo behind Uncle HC Tenari Lutu’s residence and give out fish to those who needed it or were unemployed. She did the same in Tafuna from her residence.  On occasion she would have Teuila and her children deliver fish to the Catechists at Fatuoaiga, to family, friends, and to families who would appreciate fish.  Her compassion and generosity even extended to her pets. The pets she owned, like Diesel and Hoochie Mama, lived the pampered life and were spoiled with spam and pisupo and “don’t you dare feed my dog left overs!”.

When Angie developed diabetes, she had a long battle with her health. In 2016, while at work at the ASG Sports Complex, Angie stepped on a rusted nail, which caused an infection through her foot and below her knee, and resulted in the amputation of her leg.  Being the strong willed woman that she was, she was determined to walk and did it with the help of a walker.

As Angie's health continued to decline, she would eventually become wheelchair bound.  She suffered a lot of pain, frustration and depression the last four years of her life because she had always been so active. In spite of these trials, she found joy and happiness in her nieces, nephews, family and friends, who she loved so dearly. She was known for calling or video chatting with everyone daily.

This past Summer, she was hospitalized and bedridden for about 14 weeks with infection of her leg. When Angie was healed she had to learn how to walk again and was transferred to Hope House temporarily till she could do so.  Although she looked forward to coming home, she was happy there. She loved her caregivers because they were very compassionate and treated her with such pampered royalty. She made friends with her caregivers and some of the residents.  While at Hope House, Angie grew deeper in her Catholic faith and hours before she died, by God’s grace, she had received Holy Communion and the Sacrament of Reconciliation. She was so blessed to have received her Sacraments.

This past year, Angie and her classmates were planning a class reunion for

2021, something she really looked forward to and her incentive to walk again and get better. She loved her classmates and would group chat with them almost everyday.  She was no longer frustrated and depressed but was so happy and excited about her class reunion. These wonderful ladies would even come to the hospital and talk reunion and encourage Angie to heal.  Even Weety, who is a year younger, a very close friend since high school, brought food and encouragement to Angie at Hope House. She was at the hospital before Angie died.

Honolulu Star Bulletin Sports writer, Monte Ito, wrote about Angie’s Junior World Championship.  He quoted her father, Marcus, describing their return home to American Samoa as being “...unbelievable. We were met by dignitaries and a band and we were escorted into town by a motorcade.”. Angie, we pray that you receive a similar homecoming with a choir of angels as you enter your Heavenly home.

This undated photo provided by the Langkilde family shows the younger Angela Monica Langkilde playing golf. She passed away Dec. 30, 2020 and was laid to rest last Saturday at her home in Tafuna.  [photo: Langkilde family]