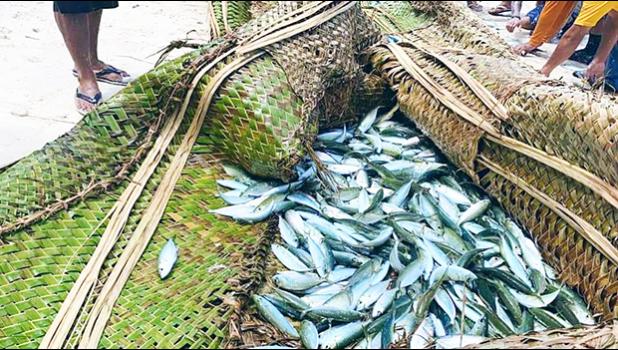 The akule was in a perfect location for the village to prepare communal efforts for an akule harvest by traditional Samoan method, rather than by hook and fishing pole. Everyone in Olosega came together to make this a successful harvest this year.

(According to NOAA in a 2016 report, there is “a decline in the American Samoa atule (also referred to as akule) (Selar crumenophthalmus) runs.  Atule typically live outside the bays and exhibit annual spawning migrations inside bays where they are harvested by village residents.  In addition to providing food, this traditional fishery is deeply rooted in Samoa and is culturally important.”

Leone village on Tutuila was the last known area — about 4- 5 years ago — where harvesting akule was done. At the time, people of the village were said to want to keep it ‘communal’ — not selling any of the fish, as it had been a long time since the akule had made a ‘run’ in Leone Bay.)