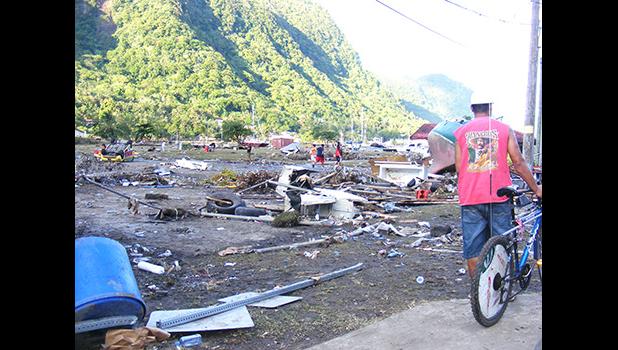 Pago Pago, AMERICAN SAMOA — Gov. Lolo Matalasi Moliga has ordered that all flags in American Samoa be flown at half-staff, to mark the 10th anniversary of the September 2009 earthquake and tsunami; meanwhile, the government is holding a memorial service Saturday, Sept. 28.

In a directive dated Sept. 25th, the governor ordered that all flags in the territory shall be lowered to half-staff beginning at sunrise, Saturday, until sunset Sunday, Sept. 29th in “observance and memory” of those in American Samoa whose lives were taken by the earthquake and tsunami 10 years ago.

“May the lowering of the flags prompt us to remember those who died and the devastation of that day, and may it also move us to give thanks to God for the lives that were spared,” Lolo said. “May we always be attentive and focused on the need to be vigilant and meticulous in our preparation for such disasters.”

This photo was taken at the entrance to the Malaloa dock, 4 hours after the Sept. 29, 2009 tsunami. A fishing boat — in the background — tipped over and others crashed into the wharf. [photo: FS]

During the Wednesday cabinet meeting, it was confirmed that the government’s tsunami memorial ceremony — organized by the local Department of Homeland Security — is set for 9a.m. tomorrow at the Veterans Memorial Center at the Tafuna Industrial Park.

Lolo informed all cabinet members of their obligation to attend this important ceremony, to remember those lives that were lost that fateful day 10 years ago. Cabinet members were told to be at the site by 8a.m. and the governor will deliver special remarks.

Later Saturday afternoon is the annual “memorial and prayer service” hosted by the Lions Club of Pago Pago and Hawaiian Airlines at the Tsunami Memorial Picnic Shelter at Lions Park.

Members of the public, government, church and other community organizations are invited to join the families and friends of the tsunami victims.

The email came through from the US Geological Survey shortly before RNZ Pacific's 7am news bulletin. It revealed a massive quake off the Samoas.

Damage from the 2009 Tsunami in Samoa Photo: Supplied

By the time we confirmed the quake and its severity, then started getting warnings to air, tsunami waves were already making landfall.

The 8.3-magnitude quake that powered them was the strongest on the planet that year.

News quickly started coming through about the 15-foot waves and their devastating impact. And of the first casualties. For a Samoan New Zealander, with family and village affiliations on the south coast, it became a waiting game.

Samoa suffered the worst with 149 deaths, while American Samoa and Tonga lost 31 and nine lives respectively.

The first confirmed death was that of Tui Annandale, the wife of my cousin Joe. I hadn't seen her since my sister's fa'aipoipoga, a wedding full of family and joy.

Samoa had always held the happiest place in my memories and I tried to get there every couple of years. After the tsunami I stopped going home.

That was until this year.

My first stop was to see Joe at his south coast hotel, the beautiful Sinalei situated just west of Siumu at the base of Upolu's cross-island road.

The resort was one of many in the path of the waves that day, a truth hard to reconcile ten years later in what were again such idyllic and perfectly manicured surroundings.

However, I noticed the pavilion over the lagoon - where my sister was married - had been replaced by a newer, somewhat grander affair.

It was a difference I was to notice throughout Samoa; newer and somewhat grander.

Tuatagaloa - Joe Annandale's chiefly title from the village of Poutasi - said the last decade had been good to the whole Falealili district.

Facing the prospect of the 10th anniversary, he told me he wanted to think about what had happened since and what it all meant. He recalled a Samoan proverb about dealing with disaster and tragedy, and how it spoke of the ability to learn from adversity and doing better for yourself and others.

"Out of this catastrophe, out of this trauma and drama has come all these wonderful blessings."

One of those blessings was the support received from outside the country, according to Tuatagaloa, who referenced the Poutasi Memorial Hall.

"That hall was built by dear friends of ours, Locky Mulholland in particular and there are others as well, who came after the tsunami and asked if there was anything they could do to help," Tuatagaloa explained.

The Wellington businessman mobilised an army of support.

They rallied and raised money "and we built the hall", which Tuatagaloa said brought the village and district together while providing a venue for conferences and other gatherings.

"With the help of my Canadian friends we've built a community kitchen there as a training kitchen, promoting good health, good cooking, and healthy living," he said.

Another to help was Stephen Tindall, founder of the New Zealand retail giant The Warehouse which has many staff from Samoa.