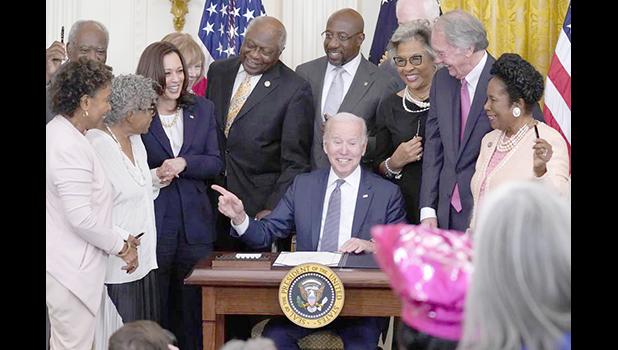 "This day is a reminder of the day the American ideal of freedom became reality for some. From this day, they too shared the possibilities of ‘life, liberty and the pursuit of happiness'," Congresswoman Uifa’atali Amata said
Sources: AP & Congresswoman Uifaatali Amata's Office

WASHINGTON (AP) — Black Americans rejoiced after President Joe Biden made Juneteenth a federal holiday, but some said that, while they appreciated the recognition at a time of racial reckoning in America, more is needed to change policies that disadvantage too many of their brethren.

“It’s great, but it’s not enough,” said Gwen Grant, president and CEO of the Urban League of Kansas City. Grant said she was delighted by the quick vote this week by Congress to make Juneteenth a national holiday because “it’s been a long time coming.”

But she added that “we need Congress to protect voting rights, and that needs to happen right now so we don’t regress any further. That is the most important thing Congress can be addressing at this time.”

Congresswoman Uifa’atali Amata is also highlighting Juneteenth, calling it a day of freedom which has been celebrated for years and recognized by Congress with prior resolutions, but is for the first time this year an official national holiday. The bipartisan bill, S. 475, the Juneteenth National Independence Day Act, was passed by Congress designating a legal national holiday, and signed this week by President Biden.

“In the United States, we are known for celebrating freedom, and we celebrate this important day together,” said Amata. “This day is a reminder of the day the American ideal of freedom became reality for some. From this day, they too shared the possibilities of ‘life, liberty and the pursuit of happiness.’ It’s a time in history that offers many lessons, including heroic examples from former enslaved people and abolitionists. In 2021, we go forward in unity as a nation celebrating freedom for all, and guarding our freedoms for the next generation.”