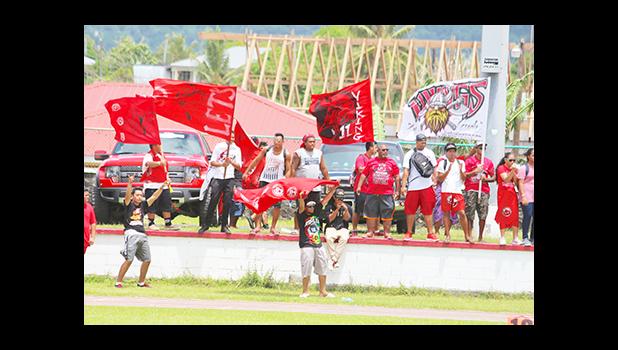 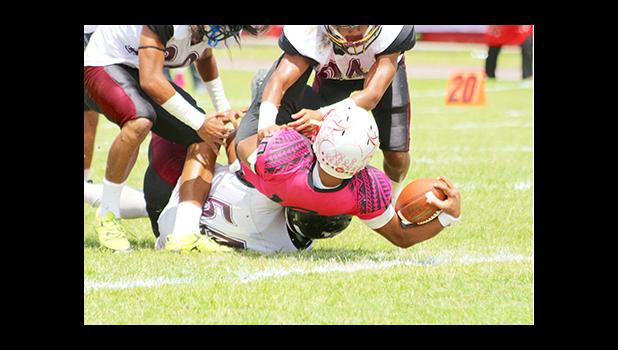 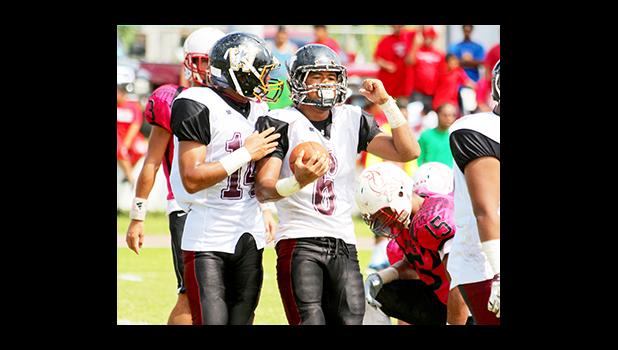 The streets of the east side bled red as they awaited the arrival of the ‘homecoming kings’ – Faga’itua Vikings Football Team who claimed another Championship title — that’s a 3-peat — last Saturday morning, after a stunning performance in slaying the No.1 seed in the league, Tafuna Warriors in this year’s title match. This is the Vikings third championship title streak within American Samoa High School Athletic Associations (ASHSAA) Varsity Football competition — all comeback victories.

It’s as if Head Coach Sua’ese Pooch Ta’ase loves playing under pressure – emphasizing that it’s not the beginning that’s important, it’s the end. Indeed they made a statement after they were behind 28 - 14 at half time, and came back to shut out the Warriors throughout the second half, while they racked up points in their shocking 28 - 38 comeback — or maybe it was not shocking, just their ‘usual’?

ASHSAA’s award ceremony that was scheduled at the end of the game was called off by ASHSAA for the safety of the students, just after the Department of Public Safety and Tafuna High School staff and faculty members broke up an army of angry Warrior fans and supporters that swarmed the sidelines to make their way towards Faga’itua’s side of the field. Luckily, DPS immediately arrived on site – police cars lined up on the field and forced the angry Tafuna fans away from the Vikings celebration that was happening at the same time on their sideline.

When the champs made their way back home to the east, they were threatened, cussed at, and stoned in front of the old Bowling Alley area by Tafuna Warriors supporters and angry students, breaking windows to the school buses that carried the football team and students – even Faga’itua parents, families and friends that were in vehicles were stoned by the sore losing Tafuna supporters.

The Vikings could finally breath and enjoy their championship win when they reached the village of Faga’alu, as a long parade of cars caused traffic in celebration of the Vikings 3-Peat title victory.

The whole eastern side from children to elderly members were on the side of the road in red, dancing, and ringing their village bells when the champions arrived home. Head Coach Sua’ese Pooch Ta’ase took the time to stop and exit his vehicle and greeted the elders from different villages they drove through, and thanked them for their support and prayers.

At the Home of the Vikings in Faga’itua, the traffic inched its way forward as the nation of Vikings walked the streets with flags up high and danced in traffic, knowing that this opportunity only comes for them, when the Vike’s bring home the spoils of victory — the “gold.”

Samoa News spoke to Vikings Head Coach Ta’ase about his thoughts on their 3-Peat Championship victory.

He said, “It is ironic that our team watched “Facing the Giants!” – thanks to Dyson Moana for the movie. God is good and the teaching we try to teach the players in honoring him through the game of football.

“We are not all perfect and even myself and my coaches, but using football to make them become better individuals is all worth it. The game was tough and it should be it is the CHAMPIONSHIP Game and we acknowledge our opponent the Tafuna Warriors, principal Beauty Tuiasosopo and their coaching staff for an awesome game.”

Ta’ase told Samoa News on their last half push, “We just prayed and hoped for the best with all the preparation throughout the season and leading up to the week of the championship. We had challenges within our own boundaries that we had to face and overcome before could face our opponents. Our players were battle-tested the week before by the Lions — going overtime, and it helped us prepare when we were down for our late rallies earlier in the season against SHS, and NVT helped us endure to the end.”

Ta’ase said, “We encourage our players to never give up and our coaches to coach them up all away to the end, which they did.

“I want to acknowledge the best group of men who have stood side by from our 0- 2 start to our Championship run. Thanks to all my coaches — Meafou Sagapolutele, Bone Taase, Merton Hunkin, Jimmy Grey, George Tafua, Vince Taala, Salemalama Tupuola, Taleni Aumoeualogo, Fotu Vaimauga, Ricky Fiso, Isaako Filipo.”

Samoa News asked Ta’ase about his thoughts on two of his Senior star players, who have played a major role in his varsity team since their sophomore year – Blessman Ta’ala and Raemos Fano, who have had a big impact on the Vikings program and their current 3-Peat accomplishment.

The head coach told Samoa News, “Again, I remind the territory with school enrollment, THS brings in 1,200 plus students compared to FHS’ 541; and we are still able to compete at a high level with these schools and win.”

He said,“These two individuals not only are expected to perform at a high level on the field but get it done in the classroom as well. They both are in the NHS and I would like to thank all their teachers and our entire staff at FHS for pushing them to become the best on and off the field. Thank you to all 20 seniors and the entire team. #LETSGo1heartbeat!”

Ta’ase concluded with thanks to the servants of God for their prayers for their school, especially the football team, adding, “we would like to extend our FAAFETAI TELE LAVA to the Honorable Governor and First lady for their endless support, also all the Representatives and Senators on our eastern side of the island.

“We would further like to acknowledge all the businesses — especially Tutuila Store (Ben & Tutuila & the crew), Tutuila Printing, and Aua & Fagaitua Skyview Store.  Thanks also to the Parks & Recreation Director Gaoteote for allowing us to practice at the Onesosopo Park as well as the village of Aua and Laulii for our training purposes. Also, the public safety for the protection for the games  and our safety.”

In addition, he sent “special thanks to my vice principals and staff especially the student body (NHS & Student Council & Band) and the ‘Best’ 12th Man Support on the island, all of the  EAST SIDE villages; Thank You to our PTA President and Vikings Alumni Association (Tauapai Laupola & officers), also the Football Booster club Muagututia Tauoa Moevasa and all the parents, and especially all our football players who represented our school.

“Finally our coaches families especially their wives for the everyday support. Fa’afetai tele lava and we love you all,” Ta’ase said.

Head Coach Kolose Ili and the Warrior Nation silenced the Vikings in the opening half of the match, as the Warriors quarterback Tala Sufia led Tafuna to a 14 - 8 lead in the first quarter of play. Tafuna’s building power capacity was only getting warmed up by then – 3:28 in the second quarter and Tafuna’s sideline roared again after Sufia hooked up with Pene Fa’avae for a 15-yard touchdown reception, extending their lead to 20 - 8, after their two-point conversion was denied by the Vikes.

Not too long after that – Tafuna took offensive possession after the Vikings turned the ball over in a four and out situation, the Warriors first down play from their own 48-yard line – Sufia bombed a long pass out to the wide open Pulenu’u Fono for another Tafuna touchdown, as they thrashed the Vikings defensive coverage with a precision air attack led by Sufia.

Their two-point conversion was a hand off to Andrew Toilolo who muscled his way pass the goal line to put the Warriors ahead with a comfortable 28 - 8 lead closing down to halftime – but before that, the Vikings decided to give the Warriors a glimpse of what was to come in the second half, when Raemos Fano and his offense all of suddenly rumbled downfield with a non-stop ground and pound running game.

Known to be ‘the’ best at the option game, Fano led the Vikings all the way into Tafuna territory, and with the frustration of the Warriors defense, it caused penalties that helped the Vikings move closer toward the end zone – Faga’itua’s second down from Tafuna’s 20-yard line and Fano hooked up with Pitonu’u Ah-Sue on a post route pass for Faga’itua’s second touchdown of the game, with just a minute and 29 seconds remaining on the clock.Their two-point conversion, Fano faked a hand off to Maurice Lotovale and rolled out to lob a pass over a Warrior defender and into the hands of the leaping Tui Ah-Chong to bring the Vikings back to trail the Warriors by a very doable margin for the 2nd half comeback kids.

The second half of play opened up with the Vikings unstoppable no-huddle offense reeking havoc in the trenches while they moved the chains to scoring their third touchdown of the game. Vikings second down on Tafuna’s 1-yard line and Fano muscled his way towards the end zone – Fano’s body was just shy of the goal line as he was gang tackled by a host of defenders, but it didn’t stop him from leaping forward to have the football pass the goal line to scoring another Vikings touchdown.

Their two-point conversion and Fano decides to send the bruising Leroy Fesili straight up the middle to bring the ‘Beast from the East’ back to life with a 28 - 22 trail.

Later in the third, Tafuna’s steam roll passing game was shut down by the Vikes after Sufia’s pass intended for Tuamoheloa was picked off by John Muliaga, to bring Fano and his offense back out on the field. 2:52 in the third and Faga’itua’s no-huddle offense was just to hard to stop as they tanked their way into Tafuna territory and a scoring a comeback conversion.

Vikings first down on Tafuna’s 12-yard line and Fano sent Lotovale up the middle for a touchdown, as the Vikings came back to take the lead 28 - 30. Their two point conversion, Fano again with the fake to Lotovale rolled out to air a pass out to Jefferey Ulu to extend their lead 28 - 32.

While the Vikings offense was red hot, Tafuna’s offensive flame was totally extinguished by the Vikes – into the final quarter of the game, Fano led the Vikes back into Warrior territory to score the final touchdown of game, extending their lead 28 - 38, while Tafuna’s quarterback was getting rocked in the backfield by Blessman Ta’ala, Tui Ah-Chong and underclassmen safety Deuteronomy Tafaovale.

Sack, after sack and tackles for losses, the Vikings saved their strength for the right time of the game. Ta’ala and Ah-Chong led the Vikings defense to a vicious attack that injured Sufia – right at the moment he was needed the most, but Sufia was hurt, forcing the Warriors to bring out Pene Fa’avae to lead the offense.

Fa’avae’s first play at quarterback and he hooked up with Tuamoheloa on a slant route, a huge gain that spotted Tafuna another opportunity to comeback and win inside Vikings territory.

Their series from Faga’itua’s 30-yard line, and Sufia came back to try to finish the game with his passing attack – unfortunately, Sufia wasn’t the same player from the first half after that injury, it forced Tafuna to a four and out situation, turning the ball over to ‘Famous’ Raemos Fano and his offense who came in and knelt the ball for the remainder of their last series to run out the clock, and officially win another title in their 3-Peat championship streak.