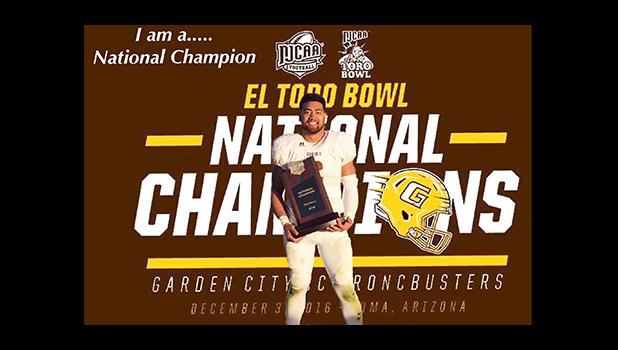 Reckoned to be the No. 1 Jr. College football program in the country now
By
Tony Gasu
tony@samoanews.com

Three homegrown sons of American Samoa representing Garden City Community College have lifted the school’s ranking in the region — they are reckoned to be the No.1 Junior College program in the country, according to Keiki Misipeka who is one of the coaches at GCCC.

Misipeka was one of the strongest links in American Samoa to send football players off-island for scholarship opportunities by opening a gateway for our local student athletes to join and become a part of the Broncbuster family in Kansas.

He told Samoa News that the Broncbusters also have held the longest No.1 ranking streak in the country for the 2016 season. “We have the number one defense in the country holding opponents to an average of 7 points a game – the Broncbusters made history by becoming the first Garden City Community College team to win a National Championship for the program, they’re also the Jayhawk Conference Champions.

Misipeka added, “Arizona Western was a tough opponent and I'm glad we walked away with the win, we traveled 18 hours to Arizona and beat them at their home field.”

Former Samoana high school standout and Jayhawk First-Team All-Conference Jamie Tago was double and triple teamed, but was able to make plays in the backfield and put pressure on the quarterback all game.

Samoa News received comments from the former Warrior, Manase. He said, “It feels great to be a champion and go undefeated” –  Manase wanted to thank Garden City Community College, his coaches, Pastor Nathan, his family, friends, his village of Fagaima and his parents for always pushing him.

Former Samoana Shark Tago was interviewed by Samoa News, via email, as well and said, “I want to thank the Garden City Community program, Head Coach Jeff Sims for giving me a second chance. I want to thank Coach Keiki Misipeka who’s been my coach since high school, I never imagined him coaching me in college and I’m truly grateful he's been by my side. Lastly I want to thank my village of Fagasa, family, friends and parents Tiana and Valu for always supporting me.”

(Samoa News should point out that Tago has since been accepted to the University of Hawaii football program and we will report on his move next week.)

Misipeka told Samoa News via email, “I started off my first year of college coaching a champion. It feels great and I'm truly grateful for all the hard work and sacrifice we made as coaches have paid off. Some of us had to leave our families – winning the National Championship makes everything all worth it.”

Coach Keiki Misipeka is from American Samoa and coached at his alma mater, Samoana High School, before leaving in 2013.  He has helped numerous student-athletes through Fieldhouse 100 and Pasefika International Sports Alliance with scholarship opportunities.

Coach Misipeka added, “I can never forget my roots and where it all started for me – I can relate to all these kids from the rock, I love my people, I'm grateful I can continue to help the kids from Samoa with scholarship opportunities to further their education and to continue to play the game they love. I already have my eye on a few athletes from Samoa and I plan to talk to our coaching staff about these kids.”

The coach is from the village of Fagatogo, and his parents are the late Kelemete Misipeka and Mrs. Iolani Misipeka, who's a counselor at Nuuuli VocTech.