Samoa upbeat despite All Blacks thrashing 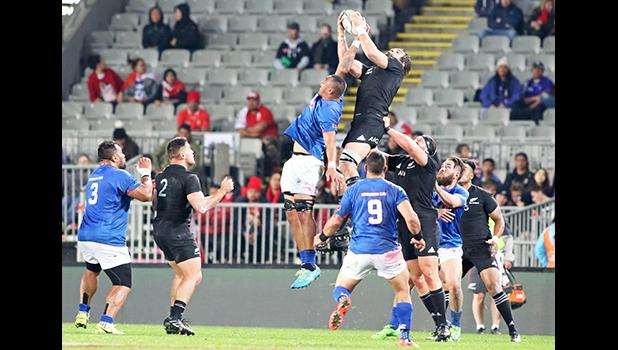 Manu Samoa are grasping for the positives from Friday's 78-0 drubbing against the All Blacks as they look to turn it around in time for Saturday's home test against Wales in Apia.

The Manu threatened in the first quarter of match at Eden Park but still found themselves 28-0 down at half-time before conceding a half century of points in the second spell.

Kieron Fonotia was on test debut in midfield and said his first taste at the top level was " a lot faster than what I'm used to and I suppose a lot more physical."

The 29 year old also experienced the fine line between success and failure.

He was in line for an early try when Tim Nanai Williams busted through the All Black defence and handed the ball to Alapati Leuia, whose pass to an unmarked Fonotia instead went over the lefthand touchline.

A few minutes later Fonotia spilled the ball with Samoa hot on attack and the All Blacks went the length of the field to score a ruthless counter-attacking try.

"If we got a couple of tries earlier on in the piece she might have been a bit different scoreline out there - might have got our tails up - but you've got to capitalise on things like that" he said.

"And just little silly things like you get in behind them and then knock it on like I did it once. It's a killer against the All Blacks and they just counter-attack."

"If we stick to our structures and gameplan we've seen in the first sort of 10-15 minutes it can work against the best so just sticking to our protocols and just being disciplined moving forward."

Veteran prop Census Johnston has been involved in the Manu Samoa set-up since 2005 and did not believe the final scoreline was a fair reflection of the match.

"I thought we started well and put them under pressure but we weren't able to execute in those last important moments to score and when you're playing the All Blacks you've got to take every chance and we didn't," he said.

"I actually think that if were able to score those couple of tries right from the start it would have been a different game."

"I think we ran out of gas around the 30th minute and got a bit frustrated and it's tough. When you're down nil and lost by 80-something points it's tough to digest and back to the drawing board but we've got a lot of positives to take out of it as well," said the France-based 36-year-old.

Johnston doesn't believe Samoa need to change much going into Saturday's test against Wales, who beat Tonga 24-6 in the opening match of the Pasifika Challenge.

He said they missed a lot of one-on-one tackles against New Zealand, for which there was only one remedy.

"It's pretty much just going back to the detail and training it out at a higher intensity because that's what let us down - just the lack of concentration and lack of finishing."