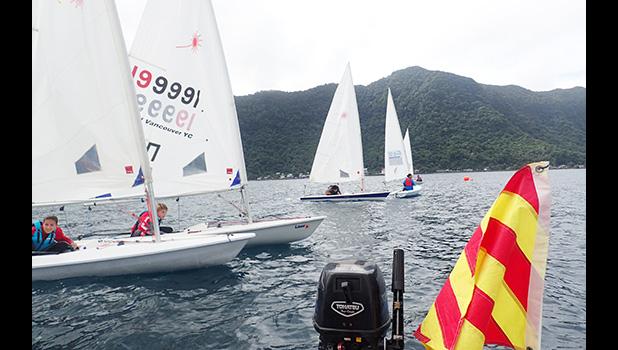 Pago Pago, AMERICAN SAMOA — The Sailing Association of American Samoa (SAASI) held its first regatta of its sailing season this weekend. The opening season regatta saw an outstanding turnout of sailors ranging from the ages of 11 to 17 sailing in Optimist Class and both Laser Radial (Female) and Laser Standard (Male).

Conditions were good with consistent South East winds at 7-9 knots and some rain squalls pushing in winds up to 14 knots. Sailors enjoyed the conditions and the race course while parents, supporters, and sponsors enjoyed the races from shore.

Head sailing coach Matthew Erickson commented on the event: “I am so grateful to be teaching such a competitive group of young sailors. These sailors truly love the sport of sailing. It’s this intrinsic love of the sport and the ocean that will keep these sailors on the water and hopefully one day bring home a gold medal for American Samoa. I wish you all could hear what it sounds like out there, the sailors are hooting and hollering especially approaching the finish line, it’s truly great competition.”

This opening season regatta marks the first event of many that will take place this season. Each sailor’s scores will be accumulated over the season to assess their overall ranking.

The current Learn-to-Sail Program held on the Pala Lagoon has 7 sailors in its first session with hopes of adding more sailors to the Optimist races by the new school year.  Sessions will be taught throughout the summer.

The Sailing Association of American Samoa would like to thank their 2016 Season Sail Sponsors — these sponsorships are integral to competitive community sailing in American Samoa.