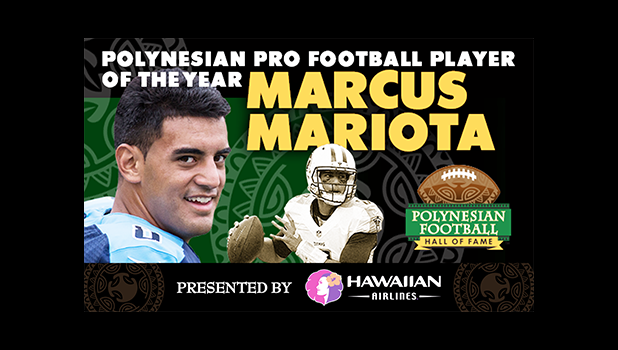 Honolulu, HI — The Polynesian Football Hall of Fame announced on Thursday that Tennessee Titans Quarterback, Marcus Mariota has been selected as the 2016 recipient of the Polynesian Pro Football Player of the Year Award presented by Hawaiian Airlines.

The Polynesian Pro Football Player of the Year Award recognizes the most outstanding professional football player of Polynesian Ancestry.

Arizona Cardinals Offensive Guard Mike Iupati was selected as the inaugural recipient in 2015.

The 6-foot 4, 220-pound Mariota was born in Honolulu, Hawai’i and is of Samoan ancestry. He is in his second NFL season out of the University of Oregon, where he became the first player of Polynesian ancestry to win the Heisman Trophy.

That same year, the Polynesian Football Hall of Fame named him the inaugural Polynesian College Football Player of the Year. This year, Mariota helped lead the Tennessee Titans to a 9-7 regular season record. He completed 276-of-451 passes for 3,426 yards, 26 touchdowns, and a 95.6 passer rating, while also rushing for 349 yards and two touchdowns.

The formal presentation of the Award will be held at the Polynesian Football Hall of Fame Celebration Dinner (January 20, 2017) along with being recognized during the Inaugural Polynesian Bowl (January 21, 2017) in Oahu, Hawai’i.