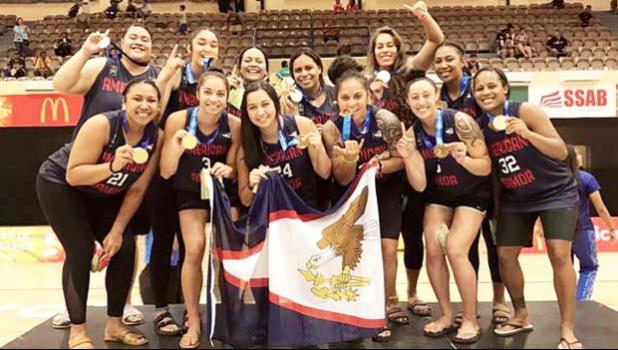 Maui, HAWAII — Mahina Hannemann-Gago hadn’t played competitive basketball since graduating from Brigham Young University-Hawaii in 2010. That didn’t stop her from getting back on the court last month and helping the American Samoa women’s national team to gold.

Her efforts helped American Samoa defeat defending champion Fiji 74-53 in the tournament’s championship game on July 17. American Samoa was runner-up to Fiji in the 2015 Pacific Games — this year’s event featured over 4,000 athletes from Pacific nations competing in 27 sports.

“This was the first time I’ve played competitively like that since graduating. … I felt it in my legs,” the 32-year-old Hannemann-Gago said with a laugh. “I would go play with the high school girls (at Kamehameha), but that is nothing compared to that high-caliber basketball. … Physically it was hard, but mentally it was fun because you just go and play your sport again.”

“Our first game, it was really only our family that was in the crowd, but once people started to see how good we were, our games were pretty crowded,” Hannemann-Gago said. “Even into the gold-medal game, there were people just everywhere.”

While forming its national team, the American Samoa Olympic Committee selected players with ancestral ties to the nation based on college experience, and by evaluating game footage and contacting coaches. Players also needed to be cleared by FIBA.

Mahina Hannemann-Gago (center) stands next to teammates during a timeout during the Pacific Games last month. [SPG Association photo]

“They wanted to build this dream team, so to speak, and American Samoa has never won a gold medal,” she said. “There was a lot that went into it. So, once you got cleared, it was like, ‘here’s your ticket.’ Very similar to college recruiting.”

Hannemann-Gago added that it was not only the players’ first time visiting Samoa, but also the first time the American Samoa basketball team had athletes outside of the local population.

“They didn’t know us coming from the states, so we were very underrated,” she said. “We beat teams in our pool by 30 or so points … and when we started getting into the medal round, everyone still thought we were going to lose.”

Despite the team only practicing together for six days prior to the tournament in July, Hannemann-Gago said that they still had a strong team dynamic.

“It was such a good experience all around,” she said.

Read more at The Maui News