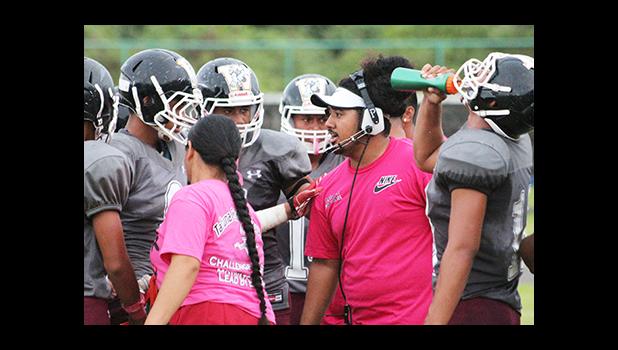 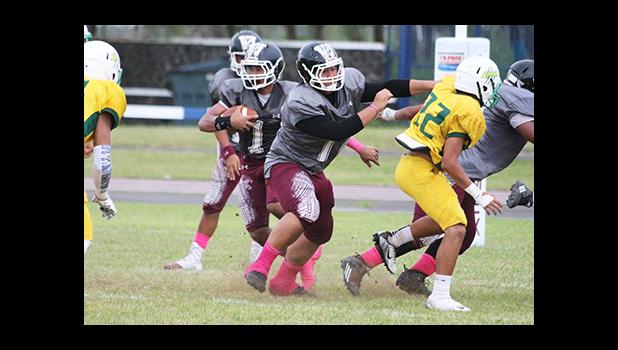 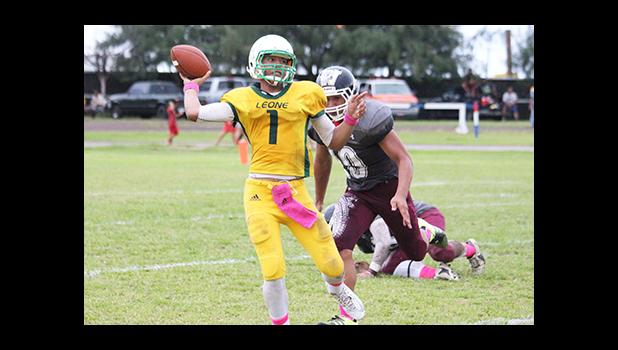 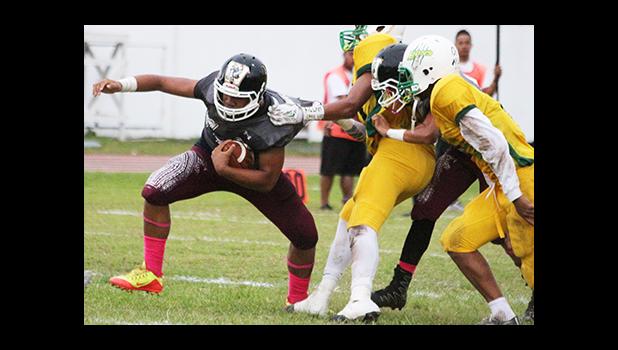 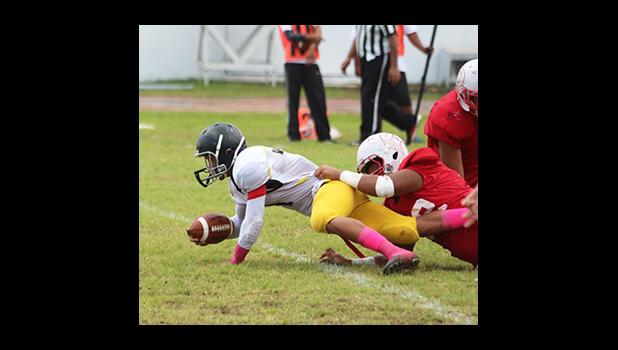 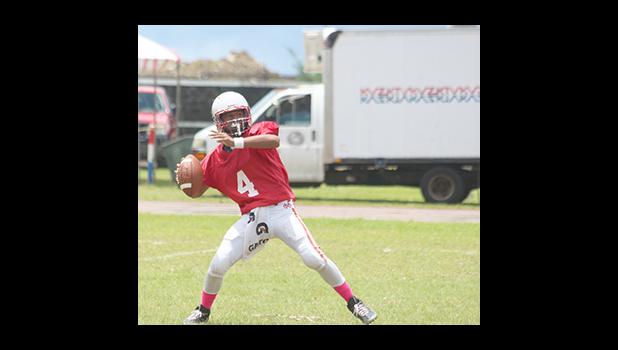 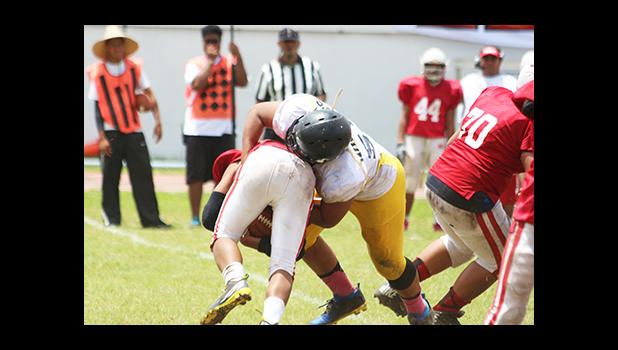 NVTHS, No.1 contender, loses to Vikings
By
Tony Gasu
tony@samoanews.com

Week No.9 of the ongoing American Samoa High School Athletic Association (ASHSAA) football Junior Varsity league bore witness to the Warriors claiming a back-to-back Championship title, after they defeated the Lions 36 - 0 last Friday evening, during the opening match of ASHSAA Football Week No.9. However, depending on the outcome of an ASHSAA board meeting today, it is not an official until they announce it.

Samoa News was informed by ASHSAA that – “according to stats and records, yes Tafuna is looking to being named the back-to-back champions of the Junior Varsity Division – BUT, Tafuna officially being ‘named’ as this year’s Champions will be finalized and confirmed after our board meeting.”

According to ASHSAA, the board has to come to an agreement in all terms – ASHSAA mentioned to Samoa News there just might be a change in standings as of the JV matches from this past weekend, especially in light of the Nuuuli Wildcats, the No. 1 contender in the JV division losing to the Fagaitua Vikings.

The second Junior Varsity competition saw the Faga’itua Vikings, putting a stop to Nu’uuli’s bruising running game – the No.1 contenders in the division that would upset some of the best teams in the league, the Wildcats, were shortened by the Vikings as they contained Nu’uuli’s threatening running game from all corners of the field, and managed to claim victory 28 - 8.

In the majority of Nu’uuli’s games, running back Iosefa Mauga – the Wildcats hardest working workhorse to field, recorded over a 100 and more in rushing yards. Last Saturday, Mauga again rushed for over a 100 yards – only this time, they lost and only scored once, which came by way of Mauga and his 70-yard touchdown run.

The opening game of ASHSAA Football JV Week No.9 kicked off with the West Side battle between the Leone Lions and the Tafuna Warriors, where the Warriors celebrated a 36 shut out victory.

The Warriors took the early lead in the opening half of the game with Minute Faitasi at the helm of Tafuna’s offense – 1:29 in the first, and Faitasi threw a long pass from midfield out to Savaliga Masunu who secured that catch for the opening touchdown of the game. Their two-point conversion in the hands of Panapa Filoiali’i was good enough to put them ahead with eight points.

Leone’s offense came back on the field with Iverson Ta’ase back at starting quarterback, after a two game absence due to injuries – Ta’ase who has always been a vital part of Leone’s Run-N-Gun strategy, the crowd was thrilled to see him back in action, as Tafuna had a hard time containing him in the first half.

Their only chance for six inside the Warriors red zone – failed after an incomplete pass to Antwan Legget, as the pass was thrown behind Legget, and could’ve ended up for six ‘if’ Ta’ase had placed it in front of his receiver.

Nevertheless, after turning the ball over, Faitasi started opening up their running game, after luring the Lions to play zone defense and watch for the pass – which worked out tremendously for Filoiali’i and Koison ‘the Samurai’ Ozu, as they had a lot of running space to work with.

4:56 in the second quarter of play, and Faitasi again hooked up with Masunu on the same play they converted for six in the first quarter – only this time, they attacked the opposite side, and came out with six with Masunu recording his second touchdown of the game in the first half of play.

Leone then setting up for another offensive drive after that Warriors touchdown, were disappointed when Ta’ase’s pass to Legget was picked off by Tafuna’s linebacker (#8), spotting another threatening Tafuna attack inside Lions territory.

Tafuna opted to go with Filoiali’i on a running play that saw Panapa taking that possession in for six – but was called back after a holding penalty was spotted inside the neutral zone. After losing 10 yards on the penalty, Faitasi turned to the ’Samurai’ with the same play he gave Filoiali’i – who slipped through the middle and recorded his first touchdown of the game, with just 1:09 remaining in the second quarter of play.

As the match went on, the Warriors lead kept extending with the unstoppable combination of Faitasi, Ozu and Filoiali’i in the backfield, only to open opportunities for Masunu who kept burning his opposing coverage during his routes from the outside – Elton Titania and Tafuna’s defense literally punished and denied Leone a touchdown throughout the ball game.

But it wasn’t just the Warriors that did all the work, Leone’s incomplete passing attempts and their penalties added on to Tafuna’s sweet road to victory, as they beckoned to the No.1 seed in the division, which is to be officially announced by ASHSAA after its board meeting, today.

Warriors claimed victory over the Lions with a 38-point win to zip.

Samoa News notes it received complaints from some of the Tafuna High School parents, who said the team was left behind by the DOE school bus at the end of the game, and the whole team had to walk back to the gym carrying not only their school supplies, but their football equipment as well.

One of the parents said, “This is very upsetting as a parent. We have put our trust in our education system to take responsibility in providing transportation for our kids, and this is how they take care of them? By leaving them behind without notifying authority or a Tafuna High School faculty or staff?”

The parent said, “My heart goes out to those parents who can’t make it out to the stadium to see their kids play due to not having a vehicle — parents like that are putting their trust in our education system to safely bring their kids back home. These are night games, and a majority of these night games would sometimes break out in fights.”

The concerned and upset mother of one of the Tafuna players told Samoa News, “Knowing that Tafuna and Leone have been fighting throughout the week in the Nu’uuli area, and the fact that it was Tafuna and Leone that played this evening – resulting in a Tafuna win, what if a fight broke out and our kids get hurt, are they going to be covered by DOE? What if a fight broke out and our kids got involved in it, would they be denied a title for taking part in this if it did happen? All in all, it all comes back to ‘why’ did the bus leave these kids stranded and without notice.”

The second match of last Saturday’s triple-header was decided between the No.1 contenders in the JV Division, Nu’uuli Wildcats and the Faga’itua Vikings. Their second meeting this season – compared to their first round of action where the Vikings won over Nu’uuli 34 - 14, Head Coach Sua’ese Pooch Ta’ase managed to discipline his young Vikings as they contained Iosefa Mauga from breaking towards the sidelines where he’s most threatening – at the same time they focused on the bruising Uriah Te’o and his short yardage conversion.

Another factor that continued to keep Faga’itua in zone coverage was the fact of knowing that the Wildcats only lethal weapon against them was Nuuuli’s running game, and Nu’uuli’s quarterback Fano, has not performed up to expectations since his appearance this season.

Nevertheless, the opening touchdown of the game came in the hands of one of the Mageo twins – the eighth grader from Coleman Elementary, Georgia Mageo muscled his way past the goal line for the first touchdown of the game from Nu’uuli’s 5-yard line. Faga’itua’s two-point conversion, an option play saw Heini Ta’ase pulling the ball out and keeping it into the end zone to put his team ahead with a comfortable eight point lead with 5:12 into the opening quarter of the game.

Nu’uuli’s offensive drive to try and answer the Vikings eight point failed after a bad snap that saw Fano in the backfield trying to recover – he did recover the football but was tackled in the end zone for a safety by a host of Vikings defense, led by the other Mageo twin, Georgie Mageo, who leads the Vikings defensive unit at middle linebacker. (Note the Mageo twins’ names are: Georgia and Georgie.)

Later in the match, Samoa News noticed that Head Coach Ta’ase had both Mageo twins on defense, as they started to open up in the passing game on offense – midway into the opening half of the game, and Ta’ase fired a long pass out to his receiver, Steven Fiso who secured the catch and stormed towards the end zone to record his first touchdown of the game – that was a 75-yard pass for six, as Fiso led the Vikes 16 - 0 into half time.

Closing off this one, Ta’ase started to play the clock game, as Faga’itua is ‘the’ best clock consuming team in the league – they continued to give the ball to Georgia to not only keep the clock running, but to gain yards as well. Faga’itua securely played a safe quarterback kneel to seal the deal in this victory of 28 - 8.