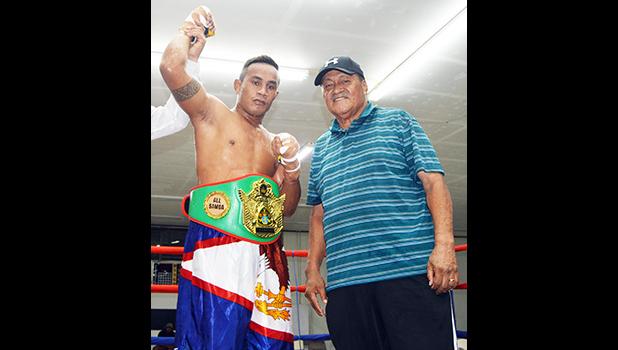 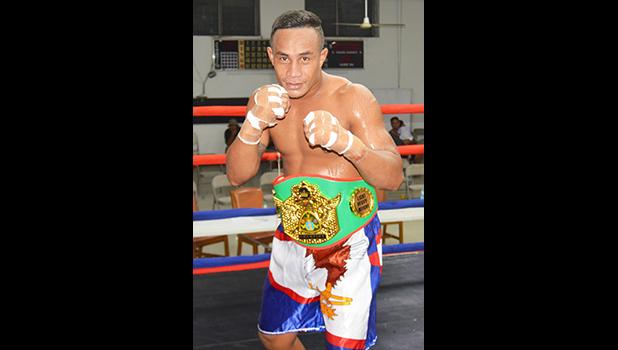 It will be Palauni’s first defense of his belt that he won last month during the Flag Day International Boxing Championship during the 2Samoas Battle.

The undefeated Palauni won the vacated heavyweight title by TKO when he defeated one of Samoa’s hard punchers, Michael Fonoti in the third round of their 8-round fight for the main event of the 2Samoas Battle.

Letoa, who is currently ranked 288 in the world will be a tough opponent for Palauni. Both opponents have impressive records with Letoa at 36 professional fights and a record standing at 30-5-1, while Palauni’s undefeated record stands at 2-0.

Winning this bout will also open doors for Palauni to land tougher bouts to help climb the ranking board faster.

“Palauni loves fighting at home in front of his fans and family so I really wanted to give him that opportunity against a truly dangerous, gifted young opponent in Togasilimai Letoa,” Toleafoa said.

“If Palauni can defend his title against Letoa, his next opponent will be a Samoan fighter who is fighting in New Zealand or Australia. The All Samoan title is for every Samoan fighter who is fighting in the Pacific and if they want to challenge the title they will get the chance to fight Palauni, but if Palauni fails to defend his title, he will try his best to bring the title back to American Samoa.”

While Palauni is the only heavyweight fighter from American Samoa who is at this level of boxing, Toleafoa said that the whole country has supported him.

“Palauni has become a superstar in American Samoa in boxing. He is a very humble superstar. When he turned pro last year, his family, friends and many in the community were behind him and I know for sure that they’re continue to support him throughout his career. I believe that our people want to see him do well. Like I did for the American Samoa former heavyweight champion, Alapati “Heatman” Aasa when I trained him to be a good fighter, I will also do the same for Palauni”, said Toleafoa.

As for his first title defense fight against Letoa, Toleafoa said that Palauni should be very prepared for the challenge his height presents.

“Letoa is a taller guy and Palauni should be well prepared to that challenge. His last opponent, Michael Fonoti was taller than Palauni, but he managed to controll the whole fight with his speed and power, which made it really hard for Fonoti to throw his punches, and at the end of the fight, Fonoti was unable to continue the fight when Palauni hit him hard with a good combination in the face and in the body. I want him to do the same to Letoa”, said Toleafoa.

Samoa News caught up with the 23-year old boxer from Ottoville during one of his intense training sessions with trainer Toleafoa. “I am ready for the fight. I’ve been training very hard for this fight and I’m great shape, thanks to my trainer for his advice”.

“I haven’t seen any of Letoa’s bouts so I don’t know how good he is but he has a pretty good record standing at 30-5-1, and I know that he will be so hard on me, because he wants to take the title to Samoa, so the burden is on myself,”, Palauni said.

“Toleafoa has been taking me through some great pad work and we’re improving my technique and movements. I’m ready and I want to fight Letoa. I have morning and evening training sessions where I start at 6a.m. - 11a.m. and in the evening the times differ. My trainer does a great job with my trainings”.

Palauni feels confident in his boxing abilities and shows no signs of nervousness.

“I’m not nervous about this fight but I might get chills when I start in the ring, which is natural for all boxers but I believe that I can win this fight. I know Letoa has fought so many times in front of his fans in Samoa, New Zealand and Australia so this fight will be fighting in front of our people and I believe that all the support will be on me”, said Palauni.

Hailing from the village of Lotofaga, Safata in Upolu, Palauni’ said, “It was my dream to become a boxer. When I was a young boy, I loved to watch boxing legend David Tua fighting in the ring and I wish that one day, I will be fighting in the ring with another guy like what Tua did,” said Palauni with a smile on his face.

Palauni started his boxing career in Samoa when he was just 12 years old when his uncle took him to his boxing club to spar with guys older than him, and it’s been eleven years since he became a fighter, the sport he said he really loves.

“I remember the first afternoon when I was told by my uncle to put on boxing gloves and start fighting, then the next thing I remember was there was an old guy who was standing in front of me and throwing punches to my face, while I was trying to defend myself until it was stopped when I cried”, said Palauni laughing.

Palauni has a record of 120 amateurs fighting with only 3 losses. He won 2 silver medals for Samoa during the Oceania Championship of 2009 and 2011, before coming to American Samoa in 2012 to find a job to take care of his parent and 9 siblings back home, and to continue with his boxing life.

He met his current trainer and promoter in 2012 and since that time, they are still working together as a father and son.

While boxing is one of the growing sports in American Samoa nowadays, members of the community believe that government needs to assist the entire boxing club with good facilities for the sport to be revived.

One parent said that the major problem that the Boxing Association is facing in American Samoa is that there is no permanent facility for the Association to hold its competitions.

“There are a lot of boxers in American Samoa but the main problem is there are no solid facilities to train our boxers to become good in the sport. We have a boxing ring at the Maliu Mai Beach Resort, but that is not a permanent ring. Kids are training in their own clubs under breadfruit trees, and if we continue to train our boxers like that, we will never see the sport moving forward (on island). It’s about time for our government to donate more money to develop our sports,” said Alfred Viliamu, a former boxer and a trainer from Mapusaga Fou.