Florence ‘Tuto`atasi’ Wasko: A woman for all seasons and all sports 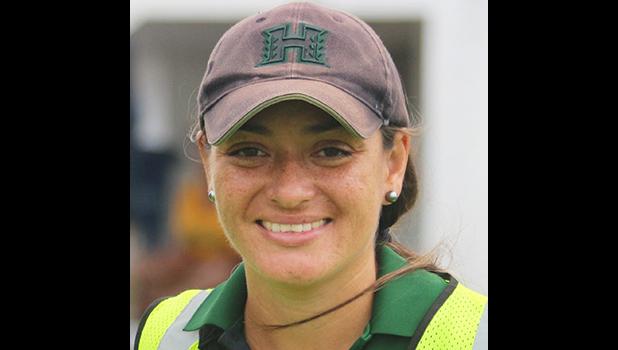 Pago Pago, AMERICAN SAMOA — Of the more than 200 participants in the mid-October football double-header at Veterans Memorial Stadium, when it came to safeguarding the island’s future, the most important person there wasn’t a player or coach, even a referee, all of whom were male.  It was the lone woman on the field.  Florence ‘Tuto`atasi’ Wasko, America Samoa’s sole athletic trainer, worked both games. She kept score by her own metrics.  The final tally for each game meant far less to her than the immediate and long-term physical and neurological consequences for the players.

When Wasko wasn’t running out on the field to examine a player who was getting up slowly after the whistle, she paced both sidelines. She didn’t have the luxury of ignoring plays. Instead, she was locked in. Unlike fans watching the games, one a high-scoring shootout, the other a tight defensive thriller, Wasko’s focus wasn’t on the score. Instead, she was watching for players whose actions revealed possible trauma — clutching a body part, lurching as they got up — and especially those who had taken concussive or sub-concussive blows to the head.

Nobody at the stadium more fiercely supports these boys. It doesn’t matter who they play for; they’re all her charges. So is every other student athlete — male and female — at seven other high schools. In all, over 1,200 students athletes rely on her. They all play hard, often with no fefe. They all get hurt. When they do, Florence Wasko is often their best friend.

For over five hours in the broiling sun, a ball cap tugged tightly on her head and a backpack of emergency first aid gear slung over her shoulder, Wasko did what she could as players confronted an array of injuries: a fractured fibula, a hamstring tear, a clavicle fracture, a concussion, and an LCL tear of the knee, as well as a bunch of lesser strains. Her other worry is whether she missed something.

American Samoa’s coaches across the sporting spectrum respect Wasko — as does University of Hawai`i coach Nick Rolovich — and what she does. They realize how much she’s taught them about injuries and injury protection. They know how hard she works on game days, even if they don’t see the paperwork, follow-up, and analysis that consumes hours each day. To these coaches, her presence at a game is comforting. It means that there’s a certified athletic trainer ready to react if something isn’t right.

“I don’t know where we would be without her,” Samoana Head Coach Pati Pati said. Her concussion and first responder training has made him and others better equipped to handle some of the inevitable trauma that football causes.

But coaches and players are often without her because not even Super Woman can be in two places at once. If there are volleyball games at Samoana and Leone, she has to choose which one to work. It is impossible for a single athletic trainer to oversee eleven high school sports programs and the health and wellness of 1,200 student athletes.

Think about those numbers — one trainer supervising over a thousand youth at eleven schools across Tutuila. And Wasko does it without much of a budget, without an office or rehabilitation clinic, ice machine and ice bath, hot tub, an electric stimulation device, and other devices that are standard operating gear for better-funded school districts.

Since I first came here seven years ago to write about the history of Samoans and football, I have met dozens of people who came back to the island to give back to its youth. They know that these boys and girls are the island’s most precious resource. Flo Wasko is among them. After earning her undergraduate and master’s degrees in Kinesiology and Rehabilitative Sciences at the University of Hawai`i, where she played tennis, and working as the head athletic trainer for a high school in Davis, California, she came home five years ago.

Since then, she’s made a difference in people’s lives and futures. Nobody better understands sport on the island from the perspective of injury prevention and rehabilitation. Wasko can point out the trouble spots on the field at Memorial Stadium where sod needs to be replaced. She knows when boys are concealing injuries because they won’t cop to hurting. And she’s vocal about the costs of injuries and the minimal resources available to help youth go through rehabilitation. She pointed to one team where in her estimation, five boys good enough to earn scholarships did not get them because of injuries that could have been avoided or rehab that was insufficient. And she knows how much lifelong pain and financial cost those injuries can cause.

Wasko confronts a harsh reality — that much needs to be done to make sport safer and increase the likelihood of youth maximizing what sport can do for them.

Bottom line: she needs help — especially additional athletic trainers, at least enough so that one is present at all games, and when dollars grow on palm trees, at practices, too. An office and rehab center with ultra sound, ice baths, hot tubs, a stationary bike, and the other rehab equipment would be an investment in these youth with tangible benefits. Safer fields are an imperative and would prevent ankle and knee injuries, as well as contusions and concussions.

Teams need help in teaching youth how to properly life weights and stretch, and to understand that rehabilitation time is imperative to returning to full strength.

Other remedies will require ASSHA and Fono intervention: regulating when teams can practice and engage in contact; baseline concussion impact testing during the pre-season; and passage of concussion legislation.

Wasko, born on June 1, Samoa’s Independence Day, was nicknamed ‘Tuto`atasi.’ That independent spirit drives her work.  She knows that she’s looking after the students’ best interests and those of the island’s future.  Florence Wasko is not the only person who cares about these matters, and she cannot confront them alone.

Rob Ruck is a professor of sport history at the University of Pittsburgh and author of Tropic of Football: The Long and Perilous Journey of Samoans to the NFL
END_OF_DOCUMENT_TOKEN_TO_BE_REPLACED