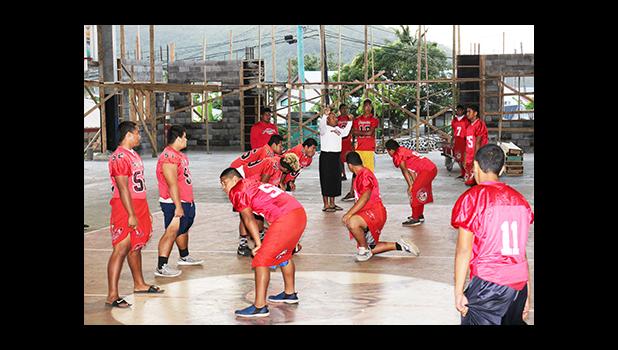 Visions of a 3-Peat record
By
Tony Gasu

The reigning ASHSAA Football Champions of 2015-16 in the Varsity Division – Faga'itua High School, "Home of the Vikings" will be coming out to defend their back-to-back title this year, with a vision of a 3-Peat record, but their main focus is to improve as the season progresses. Last year, the Vikings cleaned the house after finishing the season with another undefeated title.

Represented by the Eastern Star, the Vikings showcased a disciplined and well trained team through out their scrimmages this summer, to prepare themselves to defend the title – as every year, teams win some and lose some, but the hardest mindset of it all, is trying to regain the same momentum and players to defend a championship title – with the aim of every school in the competition to claim that title.

Working hard to top their opponents, the Vikings held an early morning walk through practice at their school gymnasium yesterday at 4:30a.m. — that is A.M. people — and Samoa News was there — during their team gathering, where Head Coach Sua'ese Pooch Ta'ase emphasized their team’s goal: To focus on themselves and what they need to do.

Ta'ase told Samoa News, "Our goal is to improve our play and challenge our players to meet and accept the challenges from the other teams – at the same time, we emphasize to our kids the fact of caring for each other, and to play with a sound, mind, and focus on the details to improve on each game in this year’s season.”

When asked about some of the changes they've made to the Vikings football program compared to the past and previous seasons, the Head Coach said, "One of the changes that we've experience so far this year is having a different set of players and new incoming freshmen players for our JV football team.”

He told Samoa News that 73 players in uniform will represent the Home of the Vikings, “We have 38 players on the varsity level and 35 players in our junior varsity program."

Ta’ase said, "The goal is to increase that number by the end of the season — it's not how you start, it's how you finish.”

According to Ta'ase, some of the major setbacks for them this year is the injury bug, and just before the season opener too. “The injury bug happened earlier in the Summer and I hope we get them back later on in the season – but for now, we just need top players who are on the rosters and to make the best out of it."

The head coach told Samoa News, "A special thanks to the best 12th Man Support on the Island.”

As Ta'ase and his Vikings prepare to battle against the Lions tomorrow morning at the Veterans Memorial Stadium, he wanted to acknowledge and thank some of the individuals that supported them throughout their preparation process.

“We would like to thank all the spiritual leaders for their daily prayers for out football team and our school.

“We would also like to acknowledge our Faga'itua High School Alumni Association, Tuimavave Laupola and all the Vikings Alumni's locally and abroad.

“A special thanks to all our teachers and staff of Faga'itua High School.

“We would like to acknowledge our regular sponsors, Tutuila Store & Tutuila Printing, Schwenke Auto Shop (Aua-Uoka and Aua boys).

“Also, our thanks and heartfelt appreciation to the Department of Parks & Recs, for the park that we use everyday.

“And, last but not least, a thank you to all the motorists who pick up our players to and from Onesosopo Park.”