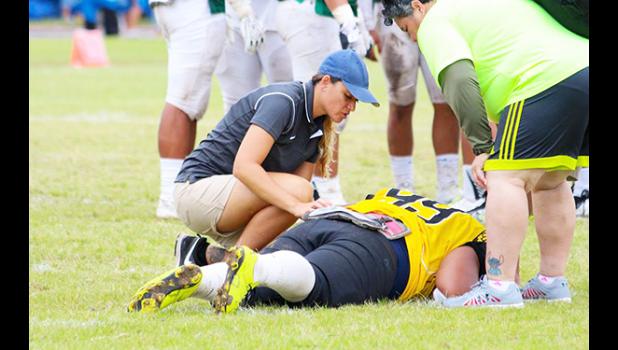 American Samoa High School Athletic Association (ASHSAA) Football Season has a problem — it’s only the third week of this year’s season, and every game has seen players injured. According to ASHSAA’s Certified Athletic Trainer (ATC), Florence Wasko some of them are season-ending injuries for the players, while others are ‘old’ injuries, “reported from the American Youth Football of Samoa (AYFS) level,” and then there are the concussions.

During an interview with Samoa News, ATC Wasko reflected on the types of injuries and health situations she’s encountered so far in the football season, and said that it’s only the beginning of the season, and she and her medical team have been flat out busy during each game.

Wasko said, “We’ve already had some season ending injuries to some players so the year definitely hasn’t started out too great.”

Being the first responder to any injured or hurt player on the field, Wasko told Samoa News, “I try my best to manage them through daily follow ups with coaches at the different schools, but it’s a bit tough.”

The ATC said, “Most of the injuries I see are old injuries that athletes have reported from the American Youth Football of Samoa (AYFS) level.”

She told Samoa News that she’s also seen numerous concussion issues, “…as coaches are getting better at recognizing the signs and symptoms – reporting them to me as they occur.”

When asked about her advice to the coaches and teams in the league to prevent further major injuries, Wasko said, “it’s hard to prevent injuries – especially playing a sport like football. The best thing for athletes and coaches to do is report the injury as soon as it occurs.

“…That helps with the recovery and return-to-play process. My goal is to get the athletes back to play as quickly as possible, but as safely as possible — the athlete is and always will be my number one priority.”

Wasko told Samoa News that her goal and focus this year is to “treat as many injuries as I can. The problem is there is only one of me – covering 9 schools that participate in ASHSAA Sports. I have about 1200 student-athletes in a school year – ideally, I would work at one school and focus on the student-athlete population there.”

She added, “I only see injuries that occur at games and that’s only a fraction of what’s really going on. The ultimate goal is to provide the best medical care I can to our student athletes.”

Speaking of the ongoing ASHSAA football season, Wasko said, “Usually in the beginning of the season, I’ll see a lot of old injuries that are reoccurring.”

And, “towards the end of the season, I’ll see more field-condition related injuries (knees, ankle, etc.) — the longer the season goes, the more the field gets beat up, and there are holes everywhere. There is no way to predict what I’m going to see on any given day.”

Wasko said, “One game I’ll have no injuries and it’s great. The next game I’ll have a fractured hand and an athlete with traumatic brain injury. There’s just no telling what I’ll see out there.”

As the only Certified Athletic Trainer on island and first responder to student athlete injuries, Wasko sends out her acknowledgement and thanks to those who’ve supported her throughout the process of trying to provide the best medical care for our student athletes.

She said “I’d like to thank EMS for always being at the games and being a second set of eyes to injuries I need help with – I have a great office staff that I work with and is really supportive and trusts me to do my job well – I have great coaches who I communicate with throughout the week to help get their players back to health.”

Wasko concluded, “I have 2 volunteers that are getting a lot of hands on experience and it’s great to have them with me — most importantly, I’m thankful to all the parents who entrust the health and safety of their children with me.”

To report any signs of injuries during football games on or off the field, you can locate ATC Wasko on the sidelines of every game, with her assisting crew – the only females on the sidelines waiting to tend to someone in need.

Concussions — and other types of repetitive head blows — in football games have been shown to be the cause of chronic traumatic encephalopathy (CTE), which has led to player suicides and other debilitating symptoms after retirement, including memory loss, depression and dementia.

This was spotlighted to Samoans in the Territory, as well as garnering national mainstream attention, with the death of former NFL player Tiaina Baul “Junior” Seau Jr. by suicide in 2012. His suicide death has since been attributed to concussions he suffered when he was linebacker in the National Football League.