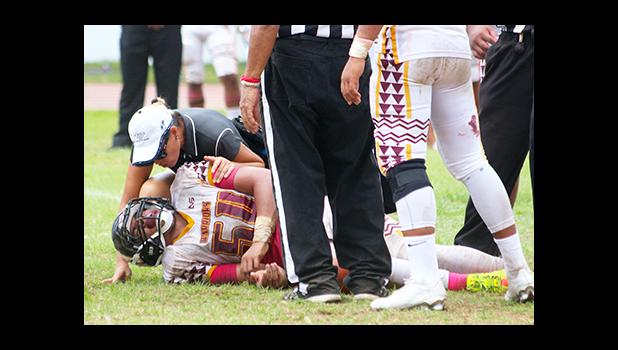 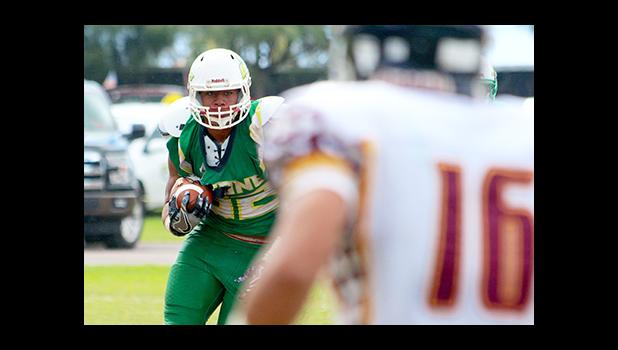 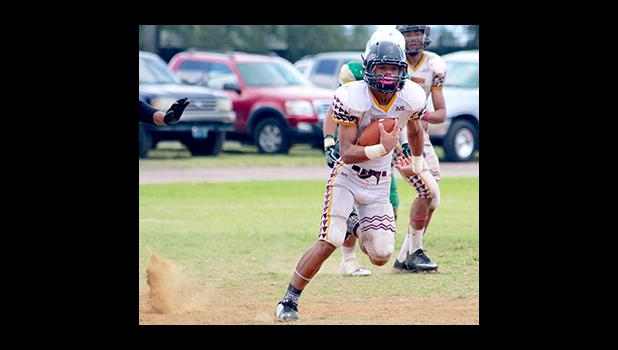 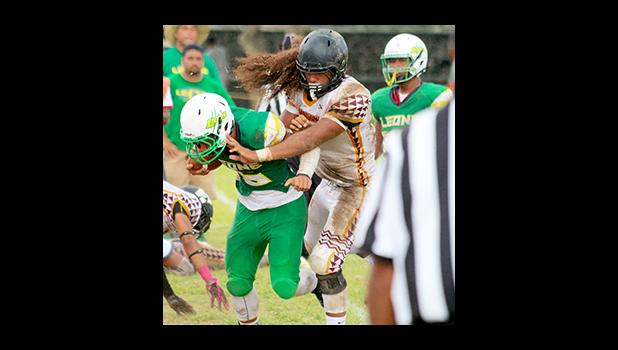 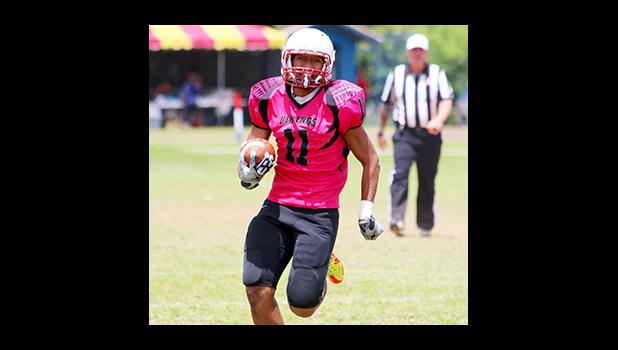 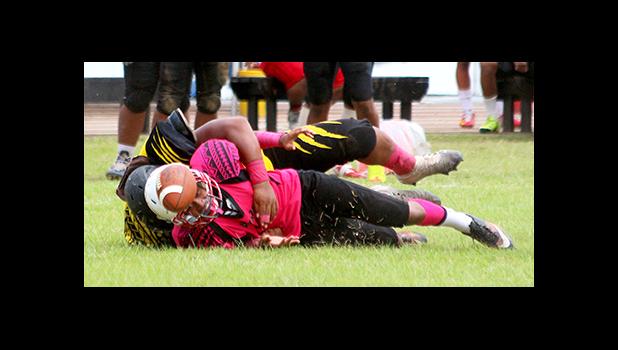 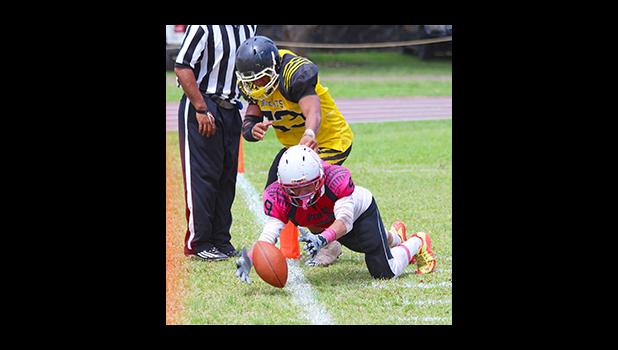 Tafuna High School sitting comfortably as No.1 seed in the Varsity Division
By
Tony Gasu
tony@samoanews.com

There are only two more weeks left of the regular season for the American Samoa High School Athletic Association (ASHSAA) ongoing football season – and Tafuna’s Head Coach Kolose Ili and his Warrior Nation who started this season with a questionable doubt of play calls, have proved the critics wrong as they are now sitting comfortably at the No.1 spot of the division, as of this past weekend.

Warriors HC Ili and his Junior Varsity team are also confirmed to be the No.1 seed in their Division – confirmation of the Tafuna Warriors as this year’s JV divisional champions will be done tomorrow during an ASHSAA Board meeting. Nevertheless, the Warriors Nation did celebrate a back-2-back JV championship title this past weekend, after they slayed the Lions in their 36 - 0 shut out victory. (See tomorrow’s Samoa News Issue on the Junior Varsity Division competition.)

Unlike the first round of competition where they were unbeatable, the Lions are not looking too good right now as they’ve had a hectic second round performance compared to how they started off in the season – starting round two of play action with a losing streak, however Leone started to change things up last Saturday, coming out with a new starting quarterback, Ui’ese – sitting out Ronnie Ma’ae as they tested the option game with Ui’ese at the helm.

The final game of last Saturday’s triple-header featured the Faga’itua Vikings and the Nu’uuli Wildcats – a match that proved that Nu’uuli can and will upset one of the top teams in their division, leading into playoffs. Unlike the first round where the Vikings contained and kept Nu’uuli scoreless – this time, the Wildcats gave the Vike’s a run for their win, as they led by two points all the way until the final quarter of the game.

Head Coach Sua’ese Pooch Ta’ase and his Faga’itua Vikings Football Program have been known throughout the years in ASHSAA Football as the ‘2nd half team’ in the league – popular for their comeback victories, the Vikes came back and stunned the Wildcats with a 28 - 14 victory, a win that still proved that the reigning Champs of the division are getting a lot more competitive, going into the playoffs.

The Warriors have been seen to be the team to have ‘the’ most injuries in the current season, however their injuries do not seem to be slowing them down from getting stronger leading into the most important games of their divisional competition —the playoffs.

Samoa News recalls some of the Warriors key players like Penei Pavihi, Pene Fa’avae and Baldwin Wilson to name a few – leave the game from old injuries coming back to effect them; but later on in the game, they would still field and then play a major role in the game. Certainly — Tafuna has continued their winning streak.

Compared to the first round of competition where Tafuna experienced their first loss of the season against Leone – they managed to flip the script last Saturday morning, and proved themselves worthy of being the No.1 seed in the division, after slaying Leone in a 20 - 6 win.

The Warriors were giving hints to Leone’s offensive unit that they were going to shut down their passing game, after Venci Peric intercepted a pass early in the opening quarter of the match to give Tafuna a warm start to their second meeting of the season; and with the help of Alex Ieremia, the Warriors led by 8 points with just 8:52 into the first quarter of play.

After giving up 90 yards worth of personal foul penalties to Tafuna in the opening half, it helped out the Warriors tremendously as they continued to punish Leone’s running game with Pavihi, Letuli and Wilson leading the Warriors defense.

Leone’s defensive reeked havoc inside the neutral zone, with Api So’oalo and Ayden Mao bringing the heat – but dead ball foul penalties started to take a toll on their rushing game, as Tala Sufia of Tafuna continued to lure the Lions to jump off-sides with the hard count, and the passing game.

A major factor to Tafuna’s lethal offensive attacks was the appearance of Nathaniel Tuamoheloa to the running back position, an adjustment made two weeks ago, that is now still the key component to catching their opponents off guard during the option game.

Tuamoheloa with a pair of touchdown’s managed to lure Leone towards him as quarterback Sufia pulled the ball back and kept it as he muscled his way into the end zone to seal the deal in the 4th quarter as they won 20- 6.

The final game of last Saturday’s triple header, was determined between the Nu’uuli Wildcats and the Faga’itua Vikings – but before this one started, everyone was excited to go home already after a long day in last Saturday’s irritating weather, thinking the Vikings would take a huge lead in the opening half, and hopefully have the mercy rule in effect so everyone could go home early.

But that wasn’t the case – Head Coach Tupa’i Rod Atafua and his Wildcats proved that their varsity program is not a joke, after they led the Vikes by two points, with a hammering performance by Nu’uuli’s defensive unit, led by Junior Linebacker Branson Pualau.

The Vikings opened up with their passing game early into the match – a strategy that moved them into Wildcats red zone after a long conversion by Vito Kitiona. 7:15 into the opening quarter of the game, Faga’itua’s first down on Nu’uli’s 1-yard line, and Raemos Fano sent Leroy Fesili up the middle with the opening touchdown of the game.

Another hand off to Fesili for two points was denied by Pualau and the Wildcats defense, with Faga’itua taking only 6 to lead in the opening quarter of the game.

Then, in the second quarter of play, Nu’uuli’s offense led by Hans Misa, started marching downfield in the give and take option game, as Misa executed his part of performance tremendously to carry the Wildcats into Vikings territory, and more.

Nu’uuli 2nd down on Faga’itua’s 1-yard line, and Misa sent Aukusitino Fonoti up the gut to score their first six points of the game – tying the game 6- 6.

7:20 into the second quarter of the match, and Nu’uuli stunned the Vike’s on a fourth down conversion – Nu’uuli in punt formation, thought it was a broken play, when their punter couldn’t gain control of the ball after the long snap – but when he did, he worked his way up field, and took this one to the house for another Wildcats touchdown. Their two-point conversion was good as they led 6 - 14 into halftime.

Then, coming back into the second half, Raemos Fano and his offensive unit only needed a couple of minutes to comeback and redeem themselves – and indeed they did. Late in the third, Fano sent Fesili up the middle on a delay hand off play for another Vikings touchdown.

In the final quarter of play, Fano hooked up with Jefferey Ulu on a quick pass for another Vikings six points – their final appearance in the end zone had them ahead 26 - 14, and after John Muliaga muscled his way pass the goal line for two more points, Faga’itua sailed back to the East side with another victorious weekend — for a 28 - 14 win.