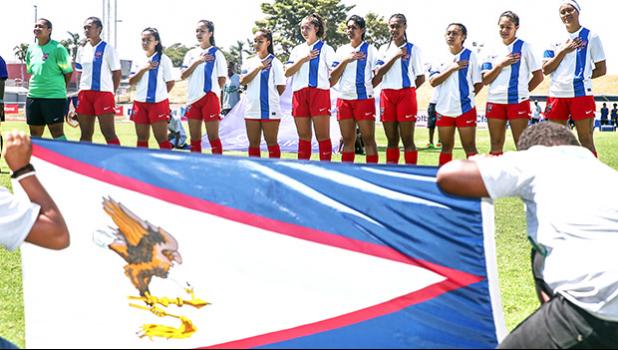 WELLINGTON, New Zealand (AP) — The return of the American Samoa women’s team to the World Cup qualifying competition for the first time in 20 years has been both a national and a family celebration.

The team is competing with three others at the Oceania Women’s Nations Cup in Fiji, the first stage of a qualifying process which will eventually involve all 11 Oceania member nations and will find the confederation’s representative at next year’s women’s soccer World Cup and the 2020 Tokyo Olympics.

American Samoa’s two-decade absence from World Cup competition and 11-year absence from Oceania tournaments is due in large part to its struggle to field a competitive team in a nation with a population of only 55,000.

The team’s return is largely due to the efforts of Seattle-based coach Larry Mana’o, who scouted a number of players living in the United States who are eligible to play for the Pacific Island nation.

Ten of Mana’o’s squad of 18 players are based in the United States, but his roster also includes three of his daughters and a niece, making the team’s participation in the Nations Cup a family affair.

“This is a different look for our team. We have more different players from different places,” Mana’o said. “I am privileged and honored to have my three daughters and a niece as part of this team here in Fiji and as a coach I am so happy to have them.

“This makes me feel extra special about this campaign as we all get together as a family for the country.”

American Samoa lost 1-0 to Vanuatu and 2-0 to the Solomon Islands in its first two matches in Fiji, but Mana’o said the experience of playing in a qualifying tournament would be positive for the team.

“A lot of these kids are younger than the teams we’ve taken in the past for our senior women so it will be a positive experience regardless of what happens,” he said.

“Football is in our blood. The whole family plays and that is how I got into football,” Alma Mana’o said. “We all stay in different parts of the world and today we are together because of football and I would say it is true that football brings everyone together.”