American Samoa Women’s U-16 team off to tournament 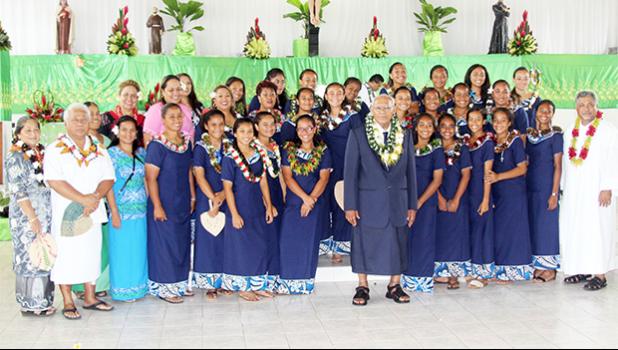 American Samoa’s youth soccer National Team is off to compete at the OFC U-16 Women’s Championship 2017 in Apia, Samoa from August 4-18, a first time representative squad for the territory at this age group.

“This is a big moment for our association because it will be the first time we are participating in a female, youth competition of this age category,” said FFAS President, Senator Faiivae Iuli Alex Godinet. “We are excited to be a part of this tournament, and the girls have been practicing hard for a long time. We have placed our faith in two female coaches, as well as two mothers of our association to guide these young women while in Samoa.”

The two coaches Faiivae is referring to are Ruth Tuato’o of Royal Puma, and Ati Faamau-Samuelu of PanSa. Both are OFC License D1 & D2 coaches, as well as players for their respective clubs.

“This will be a first time experience for me and I am looking forward to the tournament,” said Tuato’o, the team’s head coach.

“Being a part of this team is a great experience for me, especially as a coach,” said Faamau-Samuelu, the team’s assistant and goalkeeper coach.

The last time FFAS organized a women’s national team in a youth competition was 2010, a U-20 squad that played in New Zealand.

“It’s been a long time since we played in a youth women’s tournament, and we are looking forward to this new crop of talent representing American Samoa,” said Fruean, who is also the FFAS Head of Women’s Football.

“These young ladies are only the beginning of the future national team members for our association,” Mavaega-Luvu added. “Going forward they will have a lot of experience with them for other future teams.”

More than 30 players were selected as part of a training squad after the ASHSAA girls’ soccer competition ended in March, with practice held twice a week. When school ended in June, training moved to six times a week.

“The girls have come a long way since they first started training, but they have a big task ahead of them, especially against some of the well established teams such as Fiji,” said FFAS CEO Tavita Taumua. “The coaches and the team management have a lot of faith in them and we hope and pray for the best, especially for their safe return.”

Eight teams are participating in the event, with American Samoa grouped together with Cook Islands, Fiji and Tonga in Pool B.

The top two teams from each pool will advance to the semifinal stage, and the winner will represent Oceania at the FIFA U-17 Women’s World Cup Uruguay 2018.

The team attended Leone’s Holy Cross Parish’s morning service on July 30, and Father Kelemete Pua’auli urged them to play as a team, and not as individuals. He told them to respect the players they will face, but teamwork will help them overcome their opponents.

Below is the list of players and management representing American Samoa at the OFC Women’s U-16 Championship 2017 in Apia, Samoa.