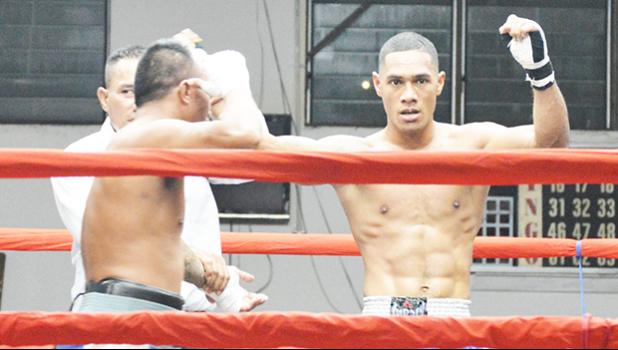 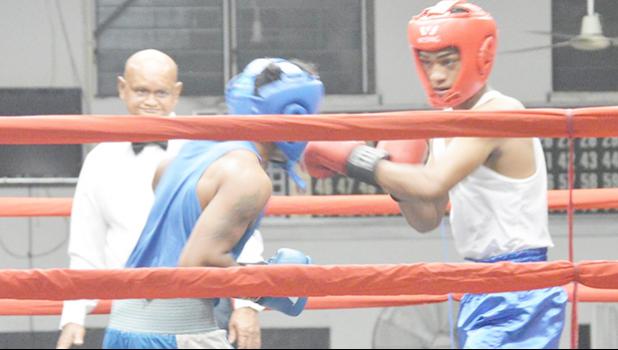 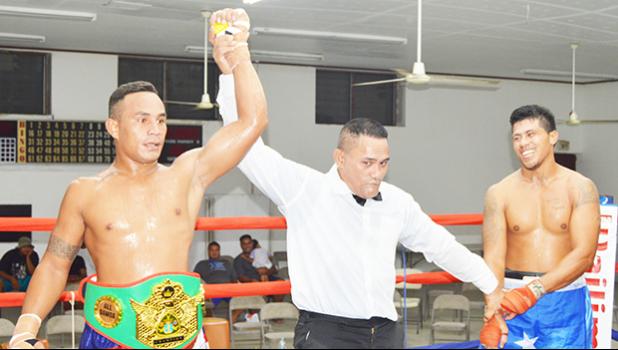 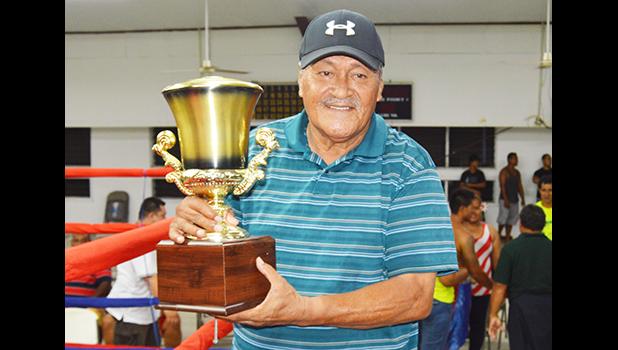 The American Samoa Flag Day 2017 Championship Boxing for the Governor’s Cup and All Samoan Light Heavyweight Title, between the two Samoas, on Saturday night, Apr. 15 ended in favor of the American Samoa boxing team. They again won the Governor’s Cup against a tough and more experienced team from Samoa; and also won all their professional bouts, which included the main event that brought the All Samoan Light Heavyweight title to the Territory.

This year, five amateur undercards battled in the “2Samoas Battle” at the old Bowling Alley in Tafuna, and there were five professional bouts.

The event drew the attention of more that 300 spectators, who came to watch some of the best boxers in both Samoas. Governor Lolo Matalasi Moliga and some members of his cabinet attended.

After an opening prayer to start the program, a representative from the Samoa boxing team, Luafalealo Vitale offered opening remarks with a big fa’amalo to Governor Lolo and members of the American Samoa Boxing Council (ASBC), including President Toleafoa Henry Tavake for inviting them to be a part of this year’s Flag day championship.

“This will be a huge step forward for our young fighters who are now battling for the win tonight,” he said. “Not only will they get the chance to show they have the talent, but it will also prepare them for the next challenge in life”, said Luafalealo.

Many fans told Samoa News they were very pleased with the boxing performances they saw, and they want to see more tournaments like this in the near future, so that our youth get a chance to show what they have.

Former local fighter, Allen Fuimaono, a 60-year-old from Nu’uuli said that our young people have the potential for boxing, and all they need is someone who can train them and put together some tournaments to show to the world what they have.

ASBC president Toleafoa was in tears when asked by Samoa News about the outcome of this year’s flag day Boxing Championship between the two Samoas.

“It’s a feeling of happiness when we won the Governor’s Cup again this year, especially when our boxing team also won all the professional bouts including the vacant All Samoan light heavyweight title. I’m out of words tonight (Saturday night), and all I can say is thank you American Samoa for supporting us.”

He thanked the boxing teams from Samoa for a tough competition this year.

The amateur matches, called the “2Samoa Battle” comprising 5 bouts, with best out of 5 winning the Governor’s Cup. American Samoa did just that — with 3 wins.

The first match was between Vaeluaga Sooalo of American Samoa and Falaniko Ailao of Samoa in the 66kg division. Sooalo proved that he had the better engine than his opponent from Samoa winning with an unanimous decision.

Samoa’s first win of the night was from Gordon Lesiva, who defeated Jolando Taala of American Samoa in a split decision in the 66kg division.

One of the interesting battles of the night was the rematch between one of Samoa’s rising stars, Jonathan Mika against one of the American Samoa’s best heavyweight contenders, Simon Afoa. Afoa won the bout, but it was not a given.

In this bout, Mika dominated the first round of the match, throwing some hard punches to his opponent Afoa, which caused Afoa to take his first count in the first round. Mika continued to attack his opponent with good body shots and a combination of uppercut and right hand punches.

But in the last two rounds of the fight, Mika looked tired and was unable to defend himself while Afoa looked active and threw more hard punches to the body, causing Mika to almost be knocked down, but he was saved by the bell at the last moment of the fight, and Afoa of American Samoa won the fight in a unanimous decision.

Samoa’s second win of the night was from Tino Ahtom when he defeated Filiga Seeti of American Samoa in a split decision during the 4th amateur bout of the night in the 69kg division.

The last amateur fight of the night was between Keach Tanoa of American Samoa, and Iosefa Folasi of Samoa. Folasi used his height advantage to control the fight and scored more points in the first round of the fight, which made it really hard for Tanoa to score any points, but in the second round of their bout, Tanoa connected his jab and right hand, followed by some hard body shots.

Everything changed in the last round of the match when Tanoa used his experience to dominate the first minute of the round by firing power body shots, followed by a right hand and an upper-cut, which caused the referee to stop the fight in the third round, when Folasi was unable to defend himself from Tanoa’s powerful attack, and Tanoa won the match.

There were 5 professional bouts, with two of the most exciting bouts of the evening that had the crowd on their feet cheering and supporting their favorite. They were the professional bouts between George Tanoa Jr. of American Samoa and veteran Tony Iapesa of Samoa, and the main event between Sui “Cyclone” Palauni of American Samoa and Michael Fonoti of Samoa for the vacant Light heavyweight All Samoa Title.

Tanoa Jr, who fought his first professional fight of his career Saturday night, kept his cool during the match with both fighters showing their power and skill in the first two rounds of the six-round match. Iapesa showed his experience and controlled the fight, but Tanoa Jr responded with power and speed.

There was a moment that many thought it was over, when Iapesa caught Tanoa Jr. in the last minute of the third round with a powerful right hand punch which caused referee Pio Folesi from Samoa to give Tanoa Jr. his first count of the fight, but Tanoa Jr. complained, and showed his hand to prove that he wasn’t affected from the powerful punch, and at the end of the 6 rounds, Tanoa Jr. won with a split decision.

The main event of the night between American Samoa’s Palauni and Samoa’s Fonoti was an 8-round bout. Fonoti has a record of 8 fights, with 6 wins and 2 losses, while Palauni has a record of one fight with one win. Saturday’s fight was only his second professional fight.

Fonoti was unstoppable in the first round, throwing power punches, but Palauni controlled his base, connecting his jabs and landing good body shots, which caused Fonoti to retreat a little bit.

Palauni was impressive in his form during the second and third rounds, throwing some good combinations to the body and face of his opponent, followed by a deadly upper-cut, causing Fonoti to stumble before the bell rang. In the fourth round of the bout, referee Pio Folesi of Samoa stopped the fight when Fonoti was unable to continue the fight due to a hand injured, which gave Palauni a technical decision to win the vacant All Samoan light heavyweight title.

The professional fights between Alofa Mataafa of American Samoa and Fale Sialoa of Samoa was a scheduled four-round fight in the Super Middleweight division. The last three rounds were dominated by Mataafa.

Of note, in the second round Mataafa connected his powerful right hand with his left-hook, followed by another powerful right hand, which caused the referee to gave Sialoa his first count of the fight. The American Samoan fighter continued to dominate connecting his fast jabs with some big shots, which caused Sialoa to retreat unable to defend himself, until the final bell rang. Mataafa won, now sporting a record of 2 wins- 0 losses.