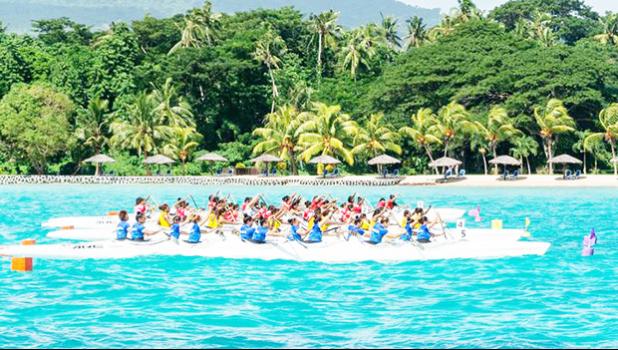 The wet conditions and high surface traffic at Apia Park have contributed to the decision to move the venue to the stadium located on the western side of Apia.

The decision to relocate was jointly made with the International Federation Technical Delegate from World Rugby, and the Samoa Rugby Union in the interests of Player Welfare and Safety.

Apia Park Stadium has been used this past week for the Opening Ceremony and Rugby League 9s competition. The Stadium is scheduled to host the sport of Athletics in week two of the Games.

Due the change of venue, the competition schedule has been revised to commence at 8AM on both competition days. A decision to further truncate the schedule if weather conditions continue, will be made on Thursday 11 July.

Ticketing information for the Rugby 7s was released by the Office yesterday afternoon.

Samoa's public have been shut out of broadcast news from the Pacific Games which are currently being hosted in the country.

Mr Bartley said the host broadcaster, Singapore based MMG, is charging local stations $US750 for three minutes of daily content which cannot be used until two hours after the event.

He said there was no games footage being used in local news broadcasts.

Bartley said the people of Samoa have already paid to host the games and they should be getting broadcast news as part of the package.

"We owe it to the public to show them and to tell them things that are happening in the games. The opening, the back-stories, some stories that would make this event such a big thing but unfortunately we're unable to give the public what they deserve."

Bartley says journalists from local stations TV 1, 2 and 4 could be adding huge momentum and value to the games if their access wasn't restricted to off-venue interviews.

There are 506 Samoan athletes competing in 27 events at the games.

Samoa's Health Ministry says the Pacific Games visitor with malaria has now been released from care after two days of isolation and there is no reason to be concerned about spread of the disease.

Dr. Robert Thomsen said Samoa does not have malaria, nor the mosquito to spread it and quarantining the patient was a precautionary measure.

He said the Health Ministry was actively monitoring for 15 illnesses including dengue, influenza, diarrhea, rashes and fever.

Dr. Thomsen said, so far, this was the only major case during the games and the intervention was brief and effective.

"It was only for two days. Once his fever broke he was discharged home again, to continue his medications at home. We don't have malaria in Samoa, nor do we have the mosquito. But one of the reasons …to isolate him was to avoid panic within the camp.”

Dr. Thomsen said there were three health clinics at various games venues and a 24-hour clinic at the Games village.

He said spraying games venues to eradicate mosquitos carrying dengue-like illness will continue until the end of July.

SHOOTING FOR THE OLYMPICS... SAMOA’S FIRST GOLD MEDAL AT GAMES

And ironically she achieved her dream on her 18th birthday today.

With her renewed self-confidence, the only daughter in a family of four is aiming to represent her country in the upcoming Olympic Games and her chances are better than good.

Competition will resume tomorrow, (Wednesday July 10) to contest two Olympic Games spots in the Continental Qualifiers Tournament, which is an Olympic Games qualifier.

The tournament is complemented by the Mixed Double Category competition.

And Walter will face a lot of heavy duty competition from top favorites Australia and New Zealand who are here exclusively to capture the two Olympic openings.

Tahiti and New Caledonia are not competing in the tournament because they are eligible to vie for a chance to represent France in the Olympic Games. That leaves 10 participating countries to contest the two Olympic spots, Samoa included.

“This is beyond the Pacific Games,” says Pacific Games Archery’s Technical Director, Jim Laven. “Australia and New Zealand are not Pacific Games competitors but here exclusively for the tournament,” he added.

For Samoa, “Our changes to make the final Olympic cut are great,” says Muaausa Joseph Walter (Jill’s proud father.)  “Judging from the results after the ranking category today, anything can happen at the tournament tomorrow.”

As for Samoa’s first gold medallist, she dedicates her gold medal performance to her father in heaven, Samoa’s tapuaiga and also the Prime Minister who she described as an “inspiration.” Lastly but not the least she praises her parents, brothers, families and relatives for their support, patience and encouragements.

“Everyone helped to get me on that podium,” says the NUS Foundation Year student who plans to major in Information Technology.

“My dad (Muaausa-Samoa Archery President and Samoa’s first Olympiad in archery) is my coach and mentor while my mom, (Mrs Sasae Walters) is my spiritual motivator.  She even brought cup cakes to the tournament today to celebrate my birthday,” giggles Jill.

And for the Prime Minister Jill has nothing but respect and admiration for the most senior member of Samoa’s Archery team as a competitor, a father and a leader.

“Who is not motivated to do your best when you have the Prime Minister on your team as a competitor,” added the proud Robert Louis Stevenson School graduate.

Winning the gold medal has been a 7 year journey for Jill who first started in the sport since turning 11 years old.  And two years ago at the Mini-Pacific Games in Vanuatu, she turned a lot of heads when she returned home with two silver medals for her country.

For XVI Pacific Games archery competition, 66 competitors from 10 Pacific Island countries minus Australia and New Zealand are vying for the honours.

Competition continues at Faleata with the Individual Category on the menu with the finale and medal presentations scheduled for Friday.

Samoa’s Prime Minister, Tuilaepa Sailele Malielegaoi, finished in last place in the men's compound bow but was quick to praise the performance of the country's newest champion, Jil Walter.

"Well it's a great joy is the fact that our very small organisation is able to win the very first gold medal for Samoa...and we do hope with the rest of the programme that we may be able to have another chance or further chances of earning medals," he said.

Tuilaepa returned the lowest score of all 16 competitors in the men's compound bow event held Tuesday at the Faleata Sports Complex, scoring just 469 points from his 104 arrows, while the gold medallist managed 1072.

But the 74 year-old Tuilaepa will return to the range in the mixed compound event later today, teaming up with Naifoua Vise Timai, who won a bronze medal for Samoa in the women's compound bow.

The Prime Minister won a silver medal in the recurve team event when Samoa last hosted the Pacific Games in 2007 but said winning is not his main reason for coming out of sporting retirement.

The archery competition continues on Wednesday, with the mixed recurve event doubling as a direct qualifier for the Tokyo 2020 Olympics.