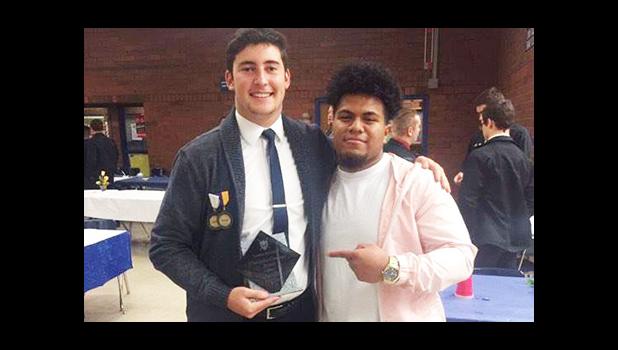 Honored for his ‘courage and sacrifice of play,’ says Utah HS coach
By
Tony Gasu
tony@samoanews.com

A local son of American Samoa who rocked the gridiron during his time in the Territory, made history at Taylorsville High School in the State of Utah this past weekend, as the school named an award after Ueseli Isileli – the ‘Ueseli Utah Isileli’ Award, where our local boy had the honor of selecting an eligible candidate to this honor.

He said, “We named it after him for his courage and sacrifice to play for his teammates and his selflessness to play another position to help the team – what a tremendous attribute to have a very deserving of a great young man”.

Isileli graduated from Taylorsville High School last summer, and he was known to be the heart and soul of their football team.

Ueseli is the son of Liza Wilson Mamea, and was born in Utah Salt Lake City in 1998. He attended Manumalo Baptist School, and graduated from 8th grade at the St. Theresa Elementary.

He spent his Freshmen year at the Home of the Crusaders and helped the Crusaders Junior Varsity Football team to their first championship game appearance against the Warriors. During his Sophomore year, Ueseli spent his first semester at Tafuna High School, where he led the Warriors JV squad in the middle linebacker position.

His second semester of the same year, was spent at the Home of the Wildcats as Ueseli transferred to the Nu’uuli Vocational Technical High School to finish off his Sophomore year in high school.

It was during his Junior year that Ueseli moved back to Taylorsville, Utah, where he eventually graduated from Taylorsville High School — also known as the Home of the Warriors.

Samoa News spoke to Ueseli’s mother who lives on island, and she reflected of  the time when her son had just left the island. “Ueseli left with two damaged meniscus in both knees from football. Knowing this, he still continued on playing after the 2014 season. He attended the All Poly Camp and he was awarded the Defensive MVP of the All Poly Camp in St. Georgia Utah.”

She added, “following through the year, in 2015 Ueseli had injured his knee again and doctors informed him he had a torn ACL in his right knee – this was the ultimate heartbreaker for him, but he still didn’t give up. He pleaded with his coaches and doctors to find a way for him to play. His high school football head coach Rod Wells contacted his people and got former Football Head Coach of the Utah Utes, Coach Mac – who got involved in this serious matter.”

According to Ueseli’s mother, coach Mac transferred Ueseli to Dr. Paulo, who cared for all major university athletes in the State of Utah and professional athletes who competed in the Olympics.

She said, “Dr. Paulo answered Ueseli’s prayers and allowed him to play for his senior year as long as he was monitored every Saturday.”

She pointed out that “this procedure continued with his injuries still a factor, but my son never let down – nothing could stop Ueseli from playing with his team and the sport he loved the most, he breathed football, it was in his blood.”

At the Taylorsville High School Football Banquet last year, Ueseli’s Varsity coaches surprised Ueseli at the award ceremony by presenting the Football Award in honor of his name.

Head Coach Wells said, “No other award would fit him best but an award that was named after him – the ‘Ueseli Utah Isileli Award’. He was a true Warrior, a brave young man, everyone knew he was injured, but were amazed that he could still walk and run, it was a miracle to see this young man perform as if he was fine and well.”

Ueseli’s mother added, “Ueseli Utah Isileli showed his coaches and teammates that miracles can happen and he proved to everyone that he could make his dream come true by playing his senior year and complete the season.”

For the nominees for the Ueseli Utah Isileli Award this year, Ueseli selected two Warriors – Tama Wilson and Chase Hess — to receive the award last Friday evening at Taylorsville High School in Utah.