Tonga on alert as Cyclone Tino sets sights on Nuku'alofa 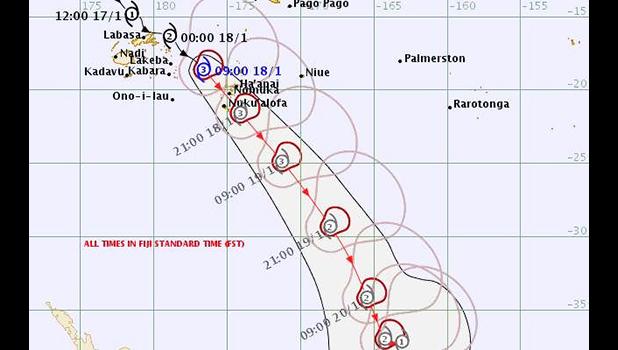 Nadi, FIJI — People on Tonga's main islands are being told to stay home and secure their properties, as Cyclone Tino moves closer to the country.

The storm was upgraded to a category three on Saturday morning as it continued to intensify in the waters near Fiji's Lau group, with sustained winds predicted to increase to as much as 130km/h in the coming hours.

The cyclone showed little sign of relenting, said Stephen Meke, a forecaster at the Fiji Meteorological Service, and was on track to pass very close to, or even directly over, Tonga's main island Tongatapu and the low-lying capital, Nuku'alofa.

"The track we have this morning, the centre is very close to Nuku'alofa and could make landfall over Nuku'alofa," Mr Meke said. "Tonga might get the full brunt of it."

In Tonga, authorities were preparing for Tino's arrival. Government offices were ordered closed early on Friday afternoon, and there was an eerie calm on Saturday morning, said Paula Ma'u, the chief executive of the country's emergency office.

A hurricane warning had been issued for Tongatapu, Vava'u, Ha'apai and 'Eua, the government said, and all flights for Saturday had been cancelled.

In Nuku'alofa on Saturday morning, the skies darkened, the winds picked up and the rain started pouring in a matter of a few hours said Kalafi Moala, RNZ Pacific's correspondent in the capital.

"Just a lot of rain and some strong winds, and the rain has been increasing in intensity over the last couple of hours," Mr Moala said. "Be prepared for a fairly rough weekend, that's been the warning."

Mr Moala said the town was still rather bustling on Saturday morning, but people boarding up houses and stashing up on supplies.

They only had a few hours to do so, warned the Tongan weather authorities in a Saturday afternoon bulletin. It warned that wind speeds would increase rapidly, from strong to gale force to hurricane force over the span of a few hours.

By tonight, there could be sustained winds as high as 140km/h, it said, possibly gusting as high as 160km/h. It also warned of flooding in low-lying areas and heavy to damaging swells along the coast, pushed by waves as high as 9 metres.

Its large convergence zone meant warnings had been issued for all of Tonga's 169 islands and 170,000 square kilometres of ocean, with gale warning also issued for Niue, some 600 km away.

If it follows its predicted track, Tino would be the second direct hit taken by Tongatapu in as many years. In February 2018, category five Cyclone Gita caused widespread devastation, destroying many houses, wiping out crops, and reducing the former parliament building into a splintered pile of rubble.

Two years on, the recovery is still very much underway. Several schools are still using tents for classrooms, homes have patchwork repairs, and crops have been struggling to recover in the aftermath.

But Mr Ma'u said lessons had been learned from previous cyclones, and he believed they were as prepared as can be.

"Go home. Prepare family and houses for the cyclone," he said in an interview on Saturday. "Lessons [have] been learned from the previous cyclones, so I think we're pretty much prepared for the cyclone coming."

The cyclone is moving towards Tonga having brushed past Fiji's northern islands on Thursday and Friday. On Vanua Levu, the country's second-largest island, reports emerged of flooding, roads and crops being washed away, and some houses being damaged.

About 1,600 people spent the night in evacuation centres as a precaution, the government-owned broadcaster FBC said, and assessments were underway to ascertain what help was needed.

After reports that two people were missing on Friday night, the authorities on Saturday said there were no reports of injuries or casualties in Fiji.