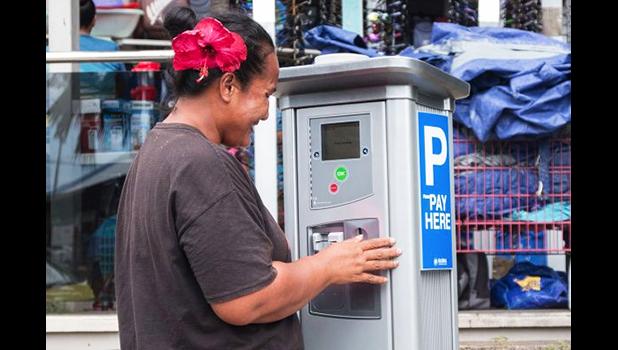 Apia, SAMOA — Members of the public will soon pay to park their vehicles in the Apia Township.

The Chief Executive Officer was asked for a comment after a team was seen in the town area installing parking meters in front of the Digicel Plaza and merchandise stores.

“There is a process that we need to follow that is why we can’t really set a time on when (the meters will become effective), but for sure it will be operational in six months time,” said Galumalemana.

The Chief Executive Officer added that there is still a lot of work to be done.

“We have been conducting our awareness campaign on this matter,” she said. “We still have consultations prior to the full implementation of the meters.”

She said it is a work in progress and until it is completed, there are issues they need to sort out.

In July last year, the Minister of Works, Transport and Infrastructure, Papali’i Niko Lee Hang, revealed the Government’s plan to install parking meters in the Apia Township and other popular public places.

The parking meters project was later approved by Cabinet in September last year.