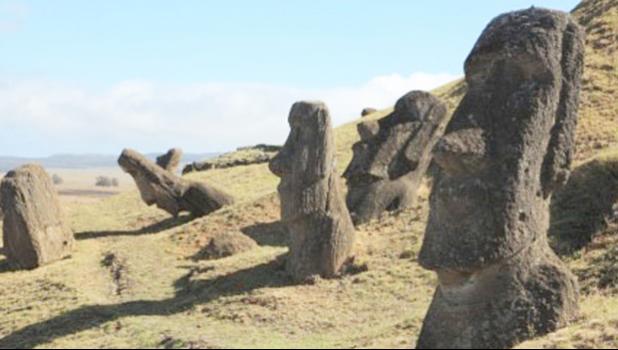 PAIR IN SAMOA COURT FOR ALLEGED FORGERY AND THEFT

Two former Assistant Chief Executive Officers of the Land, Transport Authority (L.T.A.) have appeared before the Supreme Court on charges of forgery and theft.

But counsel Fuifui Ioane of the Attorney General's Office, asked the Court for a two-week adjournment.

“Your Honor, we respectfully seek two weeks adjournment for the prosecution to finalize charges. The accused are both on bail,” she submitted.

Chief Justice Patu granted the application, saying: “The matter against the both of you has been adjourned to the 14th of August this year at 10am, two weeks so that the prosecution can finalize the charges. Bail conditions to continue.”

The pair is scheduled to appear and enter a plea on 14 August 2018.

Rapa Nui will this week limit the amount of time tourists can spend on the island because of concerns it is being overcrowded.

On Wednesday, foreigners, including Chileans who are not Rapa Nui, will have their time allowed on Easter Island cut from 90 days to 30 days.

Chile, which annexed the island in 1888, put in place the new laws in March in response to a tourism and real estate boom.

Under the new laws, anyone living on the island will have to be related to someone from the Rapa Nui people.

Public servants, employees of government service providers, and those assisting economic activity alongside their families will also be able to stay.

There will be a yet-to-be-decided population cap imposed as well.

He has just surprised his stunt double, Tanoai Reed, with a new truck.

Seiuli, who has worked with Tanoai Reed for more than 16 years, revealed the surprise in a video on Instagram.

“I love you brother and enjoy your new truck!” Seiuli writes.

“Over the course of my career, my stunt double (and cousin) Tanoai Reed @samoanstuntman has broken multiple bones, severed tendons, torn ligaments & just been an overall dominating bad ass achieving several “Stuntman of the Year” honors.

“All done with one goal in mind - deliver the best movie possible to the world.

I had this custom pick up truck delivered just in time to surprise him (he’s still recovering from a stunt injury) while we give what he thought was going to be an interview about our careers together.

“As you’ll see the moment I put my hands on my hips, that’s the drivers cue to pull away and reveal the big surprise.

“Not only does Tanoai represent our family and my career with relentless commitment and passion, he also represents an entire Hollywood stunt community that is truly the backbone of our business.

“Love you uso and thank you for the blood, sweat, tears and years."

New Zealand's Minister for Climate Change says a united Pacific voice is coming together to drive global consensus on a so-called Paris rulebook.

The rulebook would establish ways to measure progress toward the goals set in the 2015 UN Paris agreement to avoid climate disaster.

James Shaw has been in Suva for the latest Climate Action Pacific Partnership conference, part of Fiji's Presidency of the 23rd UN Climate Change Conference of Parties.

Shaw said the region's governments may start using the clout of their exclusive economic zones to help push for global environmental change.

"There is a recognition that that EEZ is colossal and extremely valuable and so I think you might see something like that.

"At this conference, this is sort of part of a process right, what I can see is sort of a slow coming together round a few key priorities during the course of the second half of this year."

Shaw said the target for the Pacific was to ensure the Paris rulebook is agreed to at the COP24 in Poland in December.

There is no debate about climate change anywhere in the Pacific, outside of New Zealand, he said

"There are countries here that reckon up to 25 percent of their annual budget is dedicated to climatic events. You have cyclones that wipe out 30 percent of a country's GDP in the space of a few days."

Shaw said the Pacific provides inspiration to the rest of the world.

Despite being at the forefront of the effects of climate change and being infinitesimal in terms of contributions to the problem, he said, the Pacific is committed to mitigating its own emissions.

"Getting renewables into their energy sector, looking at how to electrify their transport," Shaw said.

"They kind of say, well look we can't be victims in this. We've got to lead the world and demonstrate that no matter how small you are, every little bit counts."

Across the nation, police departments have jumped on a lip sync challenge where officers create a funny video to a hit song.

The videos gain a lot of traction for showing a different side of law enforcement — a more relaxed and fun side.

The Honolulu Police Department hasn't yet released their version of the challenge. But in the meantime, a video involving an HPD officer is going viral for his version of Hawaiian-style fun.

While assigned to security at a graduation party over the weekend, an HPD officer in uniform hit center stage as a part of the night's entertainment.

"Totally a 'only in Hawaii' moment," one comment on the video read.

The officer broke into an upbeat hula auana to a rendition of Aloha Ia O Waianae.

Live musicians played as guests to the party "chee-hoo'ed" and clapped along.

"This just shows us that our men/women in blue are humans just like we are! Awesome performance! They should be given the respect that they deserve for all the service and protection they give us and put their lives on the line everyday for us!" another comment from a viewer said.

The Facebook Live video, which was posted Saturday night, has already been viewed more than 110,000 times and garnered over 2,100 shares.

It's truly a Hawaii-kine moment filled with the aloha spirit.

You can watch the video at: https://bit.ly/2Kb9Vhk