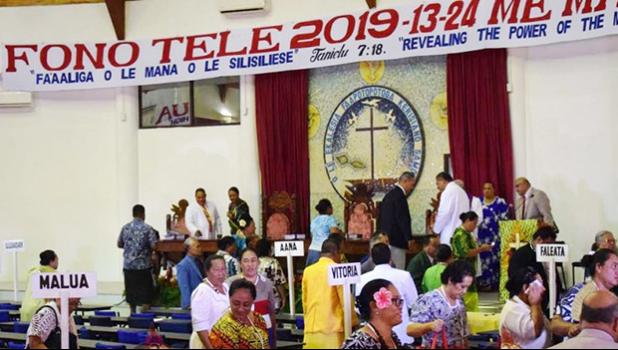 Apia SAMOA — The Congregational Christian Church of Samoa (CCCS) General Assembly has agreed to put aside ST$1 million talā for the legal fees of church ministers charge for not paying government taxes.

The CCCS General Secretary, Reverend Vavatau Taufao who has been re-elected to the position confirmed the decision today before the Assembly concluded.

Twenty church ministers have been charged for failing to withhold tax, and failing to file wage tax returns.

During the conference this week, the Apia East, A’ana and Faasaleleaga Districts made reference to the tax issue although it was not on the agenda for the conference.

Apia East urged the General Assembly to remain firm in its stand on the tax issue with the Government as the time it gives in, will open the door for Government to interfere with matters that pertain to the church.

Both Fa’asaleleaga and Aana districts also urged the General Assembly “not to give in to the Government.”

The General Assembly reaffirmed its objection to the government law for church ministers to pay tax in the 2018 conference.

The General Secretary clarified this past week that standing policy dictates that any church resolution can only be revisited after three years. This means that the tax issue can only be brought back on the agenda in the 2021 General Assembly.