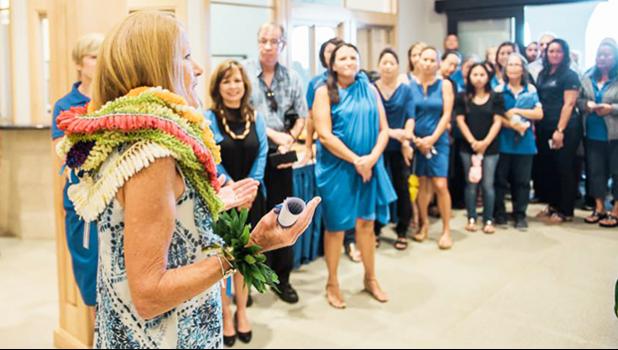 HONOLULU (August 1, 2017) – Students, faculty and staff from all divisions and schools at Chaminade University enthusiastically greeted Dr. Lynn M. Babington on Aug. 1 as she officially began her tenure as the institution’s tenth President.

Dr. Babington, whose appointment was announced last December by Chaminade’s Board of Regents, most recently served as Interim President at Fairfield University in Connecticut. Her previous roles at this Catholic university included Provost and Senior Vice President of Academic Affairs.

“Our new President is a highly regarded educator, administrator and thought leader who will further the progress we’ve made over the past two decades at Chaminade,” according to Board of Regents Chair Vaughn G.A. Vasconcellos.

“Dr. Babington’s fresh perspective and personal warmth will lead to new ways of invigorating the campus and all the communities we serve,” he said.

“Joining the Chaminade ‘ohana is a tremendous honor and privilege,” Dr. Babington said. “The university has a well-deserved reputation for its strong liberal arts foundation and Marianist mission of creating a more just and peaceful society.

Having begun her career working with disadvantaged populations, Dr. Babington said Chaminade’s continued commitment to improving the community it serves “speaks to her passion” by addressing disparities in healthcare, education and the criminal justice system.

Dr. Babington also praised Chaminade as having “tremendous growth potential” and looks forward to “building on the university’s solid foundation” by working closely with the campus community and supporters in the public and private sectors.

“As for our students,” Dr. Babington said, “I’m inspired by their pursuit of academic excellence and their outreach to needy populations through service learning projects. Moreover, the wonderful diversity of our student body makes Chaminade one of the most multicultural campuses in America.”

In addition to her positions at Fairfield, Dr. Babington held leadership roles at Northeastern University from 2003 to 2011 and studied as a Fulbright Scholar at Ben Gurion University in Israel.

In 2013, she was selected for the Robert Wood Johnson Foundation Executive Nurse Fellows program, a three-year leadership development experience designed to enhance the nation’s healthcare system.