They are now 'Army Strong' 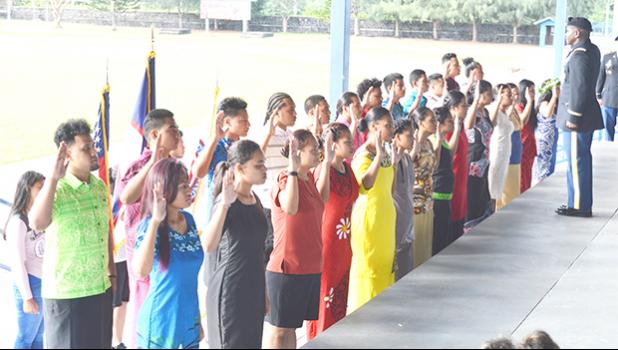 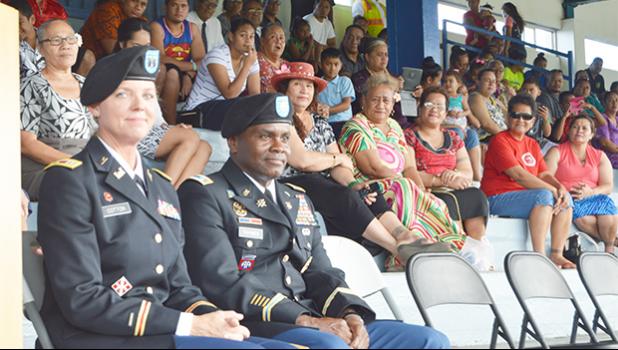 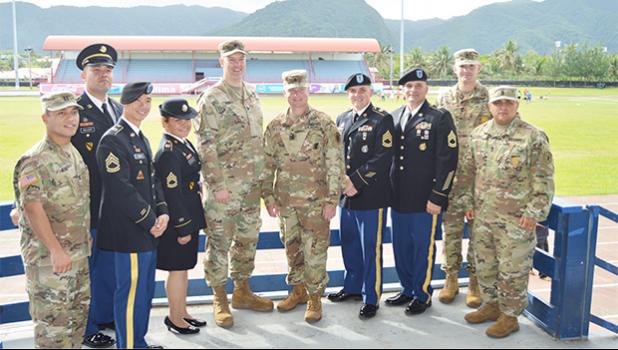 Thirty-one future soldiers took the Oath of Enlistment for the US Army during a brief ceremony at the Veterans Memorial Stadium in Tafuna on Wednesday afternoon, in the presence of proud parents, families and friends.

They are part of the 80 Delayed Entry Program enlistees — the largest single DEP recruitment in US Army history. (See story Tuesday, Aug. 15, 2017)

The ceremony was arranged to motivate future soldiers and it was also a means for families and friends to witness firsthand the Oath of Enlistment.

Before the ceremony started, SFC Shaun F. Salanoa from the local US Army Recruiting Station welcomed families and friends of the future soldiers, and introduced four US Army officials who are in the territory for a memorial service honoring SFC Albert Chung, who died during a snorkeling accident last week in Alega.

After the swearing-in portion of the ceremony, Capt. Cotton spoke about the Army Values, the importance of being a soldier, the differences between now and when she came into the Army, and what the Army stands for today.

“Today is the first step towards a new adventure and career. I love being in the Army — traveling and meeting new people — and making new friends is a lovely bonus,” said Cotton.

“Now you took an oath to defend the Constitution of the United States. With this oath comes great responsibility. Being a soldier is work. Most of the time the work is fun, but sometimes it is just plain hard. Just like in school or in any job, you must work hard to be successful in the Army,” Cotton continued.

She encouraged the new recruits to be consistent in their effort to keep physically, emotionally, and spiritually fit. She explained that they are no good to their team or battle buddy if they are not strong and healthy, and they have to put in the individual effort to work with each other and their team.

“Together, celebrate success and support each other during rough times. This is what makes the Army family strong; but remember, be proficient in your job,” she urged.

According to Cotton, being a soldier is sometimes fun, not only when they are learning new things and making new friends - but most of all, it’s exciting when they are part of a team. She explained that there are times when it is going to take extra effort — they will have to push through, even if they don't feel like it.

“Remember, the difficulties help us grow and develop, and you will reap the rewards as you progress. It will also be repetitious. The repetition, or muscle memory as we like to call it, helps us do our jobs efficiently and effectively when we are under pressure, and it is also called practice."

She reminded the future soldiers to keep a positive attitude and remember why they joined the Army.

Cotton said that some may have joined to get money for school, some as a way to support their families, and some just to get off island, but at the end of the day, “you get to be in the Army; you do not have to be in the Army.”

“You had the freedom to choose to serve your country and protect its citizens. What a privilege. I challenge you to look for ways to contribute to the greater good as you go through your Army career. Whether you are going active duty or joining the Army Reserve, it is a wonderful opportunity to serve this great nation of ours,” Cotton said.

She touched on the importance of keeping in touch and said correspondence between soldiers and their families are priceless.

“As a soldier myself,” Cotton said, “I also know what it is like to be the one deployed and leave my family behind, but I know that I am doing the job I was trained to do, and am grateful that I can do my part to protect my family and my countrymen.”

Among those who took the oath was Michael Punivalu, 19, of Utulei, who told Samoa News that the reason he joined the Army is to travel and get into something.

“I want to do something honorable. There are different parts of the job,” he said. “But one of them is going out to the field and getting samples if a bomb is dropped, and stuff like that.”

Dorothy Taua, 19, of Tafuna told Samoa News that the reason she joined the Army is to help her family, further her education, see the world, and follow in the footsteps of her grandfather, who served in the Vietnam War.

While future soldiers are focused on honor, respect, and devotion to duty, their moms are filled with pride, but also worry and anxiety.

Taufa’anu’u Isaako’s daughter, Tulili, was one of the future soldiers who took the oath to serve in the US Army on Wednesday. She told Samoa News it would be really hard for her and her husband to see their daughter leaving them to join the Army.

“I’m a little apprehensive, but not surprised,” she said. “She had made it clear from a young age that she was very interested in serving her country.”

Isaako said although her grandfather was in the US. Army, military life is a new experience for the family.

“We are fairly new to all of this and are learning a lot. 'Proud' does not even come close to explaining how I felt when I saw my daughter take the oath,” she concluded.

Born and raised in American Samoa, SFC Salanoa of the local US Army Recruiting Station expressed his positive feelings about seeing so many young people from the territory joining the Army.

“There are a lot of opportunities for our youth who are still looking for jobs that want to further their education, or are searching for a better future," he said.

"This is your chance. There is so much joy and satisfaction in serving the nation and in protecting our people and our society.”