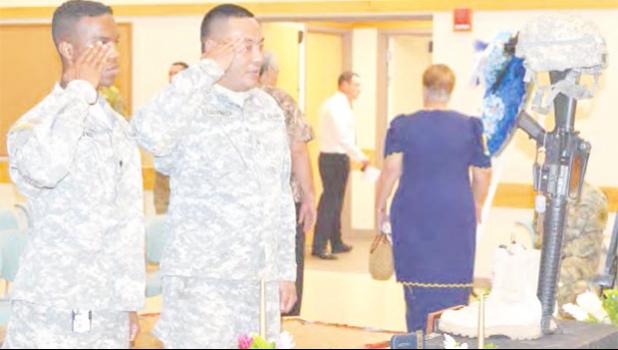 US Army officials both local and off-island gathered at the Konelio Pele US Army Reserve Center in Tafuna last Friday afternoon, to honor and pay tribute to their fallen comrade, SFC Albert H. Chung, the army recruiter who drowned at Alega Beach on August 6.

Others who were in attendance included local army reservists and retired soldiers like Lt. Lemanu Peleti Mauga and Tauapa’i Laupola.

Owners of Tisa’s Barefoot Bar, Tisa Fa’amuli and Candyman, along with friends, were also present to pay their final respects for SFC Chung.

Retired US Army Chaplain, Rev. Fouvale Asiata who is now the minister for the CCCAS Matu’u & Faganeanea delivered the opening prayer.

Master of Ceremonies, Commander Curtis Hulzhizer welcomed the audience and thanked them for coming out to honor the life and service of SFC Chung, who was remembered by his colleagues as a professional, a helpful and a very special person, who always had the ability to brighten the room with his presence.

Commander Miguel Diaz, a recruiter from Guam, described his friend as a true leader who always cared for others.

He said that during the past 6 days here in American Samoa, many friends and colleagues of SFC Chung have spoken about what a charismatic person he was.

For instance, back in January, during SFC Chung’s first visit in American Samoa, there were recruiters processing applicants all morning and it was around lunchtime when SFC Chung decided to grab a bite to eat at Carl’s Jr. — and after a few minutes, he came back with a bag of burgers.

“Chung said he didn’t want to be the only one eating, so he purchased burgers for the applicants. This is just one of many examples of his caring personality and his kind heart,” said Diaz, who described Chung as an amazing soldier and a great friend.

“I struggle to find words that I could use to explain to people, who hadn’t had the pleasure of knowing him, how wonderful of a person he was. I wish that he was still with us. Chung was a man, a leader, a brother, a son, and a true soldier. I will forever remember his infectious smile, his humor, and his heart. I miss you Chung, and will always appreciate the good times we had while we worked together,” said Diaz.

Commander Hulzhizer in his testimony said that SFC Chung was in American Samoa performing a very important mission, helping to enlist young men and women into our great Army, and he was part of a team making it possible for people to become soldiers.

“Chung took his job very serious. He was very meticulous in his work. He paid attention to detail and sought excellence in his work. What a great example for us! Being professional, excellent in our work, learning to do our best,” said Hulzhizer, who added that from his earthly perspective, what happened to SFC Chung was a great tragedy.

“How could this happen? This side of heaven we may never know and understand. And even though we may not find out the reason why, at times like this we can take comfort in the promise of the Scripture that God will never leave us nor forsake us. God is our refuge and strength, and He will help us in times of trouble,” Hulzhizer continued.

Speaking to Samoa News, one soldier said that SFC Chung served his country with honor and distinction, including two combat tours to Iraq. He was a proud patriot.

“There will never be another SFC Chung. He was a special individual with unique gifts and talents. His life ended during a trip while performing an important mission on behalf of his country, helping to enlist others to become soldiers. Chung was a true professional, dedicated to his job. Let’s follow his example. Let’s honor his memory by being the best soldier and people that we can be,” said one soldier.

He attended the One Station Unit Training (OSUT) at Fort Leonard Wood, Missouri in 2003, and ended up as an 88M, Motor Transport Operator MOS, after he completed the OSUT.

He was then assigned to the 526th Brigade Support Battalion, Fort Campbell, Kentucky on July 2, 2005 as a Vehicle Driver.

SFC Chung arrived on island on Friday night, August 4, as part of a support group on a recruiting enlistment mission. He drowned on Sunday, August 6 while snorkeling with other servicemen at Alega Beach.

His body was flown home to California last Friday, August 19.