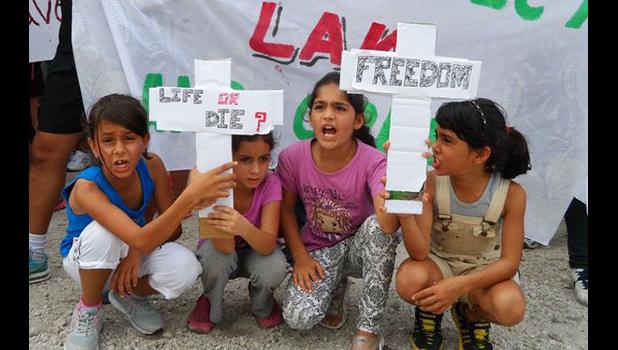 OPINION — Over the weekend, tens of thousands of people protested in hundreds of demonstrations across the US against the Trump administration's "zero tolerance" immigration policy.

But the detention of children that has created such outrage in the US has been happening in our backyard for years.

The backlash has already seen US president Donald Trump back down on separating children of asylum seeker families on the Mexican border, although so far few have been reunited with their families.

But Mr Trump's policy of child separation is about to be replaced with the indefinite detention of families and children in "austere" tent camps on military bases holding tens of thousands of asylum seekers.

Where have we seen that before?

Mr Trump's policy has caused a storm of international outrage and disgust - but not from Australian politicians.

The outcry in the US is encouraging. But arguably Mr Trump's policy, and the systematic abuse of children it involves, has been an integral part of Australian immigration policy for almost 20 years.

Eyebrows have been raised over the New Zealand teenager currently being held in immigration detention in Australia, but the stark truth is that the detention of children goes largely unremarked this side of the Pacific.

While the Australian government denies responsibility, and often makes claims that there are no children in detention, over 130 children are still being held on Nauru. While not in closed detention camps, there are another 179 children in 'community detention' in Australia who are not free and also have an uncertain future.

In January, the Australian Federal Court ordered that a Nepalese refugee family of four be transferred from Nauru to Australia because of a long history of mental health problems.

In February, a Federal Court judge ordered a 10-year-old refugee boy, who had made repeated attempts to kill himself while on Nauru, be moved to Australia for acute psychological care. The judge declared that he would be at imminent risk of dying if left in the regional processing centre.

There have now been a series of similar court orders regarding children (and adults) at risk, after five years of torture and neglect on Nauru. (The latest, on Tuesday 3 July, involved an Iranian family with a two-year-old suffering viral encephalitis.)

The risk to children has long been known from the experience in Australian detention centres. In 2015, the Moss Report reviewed allegations of physical and sexual assault of transferees, including children, on Nauru.

Then Australian prime minister Tony Abbott shrugged off the report.

The government said it accepted the recommendations of the report, yet three years later nothing has changed on Nauru.

In 2013, in a deliberate government policy, siblings on Christmas Island were separated from parents, and from each other, with some allowed into Australia while others, including unaccompanied minors, were expelled to Nauru and Manus Island.

Now this is being compounded. There are at least nine nuclear family units split between Australia and Nauru, with a number of fathers prevented from seeing their children following their birth in Australia.

In a famous phone call between Australian Prime Minister Malcolm Turnbull and Mr Trump, he said, "You are worse than I am," after his Australian counterpart told him how Australia expelled asylum seekers to offshore islands.

Mr Turnbull pleaded with Mr Trump to reaffirm the deal, but he also told Mr Trump, "It does not require you to take any [refugees]."

Mr Trump has taken Mr Turnbull at his word. Mr Trump's travel ban has prevented any refugees from Iran, Somalia, Sudan, Iraq or Syria being accepted under the US resettlement deal this year. Yet the Iranians and Somalis, and their families, account for around half of the refugees on Nauru and Manus.

The children of those families, like those in in the US, face indefinite detention.

The detention of children that has created such outrage in the US has been happening in our backyard for years. Now, Australia's refugee detention policy is being transplanted into the US.

We need the outrage that has engulfed Mr Trump to sweep across the Pacific.

*Ian Rintoul is a Australian political activist, best known in Australia as a refugee advocate, and as spokesman for the Refugee Action Coalition Sydney.
END_OF_DOCUMENT_TOKEN_TO_BE_REPLACED