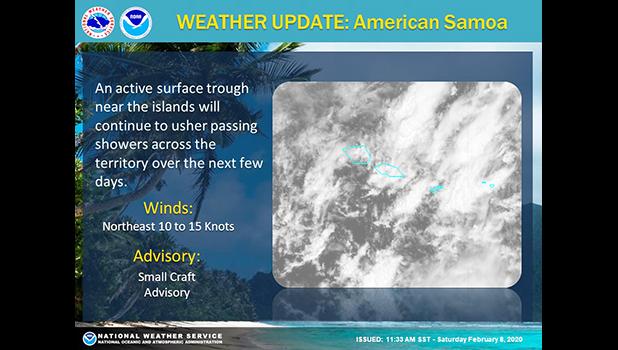 Pago Pago, AMERICAN SAMOA — Current satellite imagery show a line of enhanced low-level clouds extending north through south of the territory, especially over Manu`a; this indicates higher shower activity over the Manu`a islands, according to the NWS Pago Pago website.

Latest 18Z Pacific Streamline Analysis show a ridge to the east and an elongated trough to the south of
the territory. Present model data depicts the aforementioned ridge dominating weather patterns for the short-term forecast while ushering in breezy easterly to northeasterly conditions. A slightly drying trend is expected by at least Monday, as dry air from the ridge propagates towards the Samoa Island chain.

Associated with the above-mentioned trough are two lows: 1. near Wallis and Futuna and 2. Tropical Depression (TD) 06 F (91 P). Current model data show no direct impact from any of these systems as previous model runs have been consistent in keeping their track away from the territory.

However, the low near Wallis and Futuna is forecast to move near the Samoa Islands, but remain out of our Warning Area (more than 300 nautical miles). Moreover, latest model data show an active surface trough being pulled over the territory by the aforementioned low, which would increase the potential for flash flooding and windy conditions by at least Thursday.

Latest observations from the Aunu`u PacIOOS buoy show seas around 7 feet with periods of 12 to 13 secs due to a northerly swell. As tropical weather continues to surround the territory, it is likely that wind-generated waves will slightly keep seas around small craft advisory thresholds in the next few days. However, current Wave Watch III model data depicts a more consistent and higher increase in seas on Wednesday, as swells from a storm near New Zealand reaches coastal waters by that time.