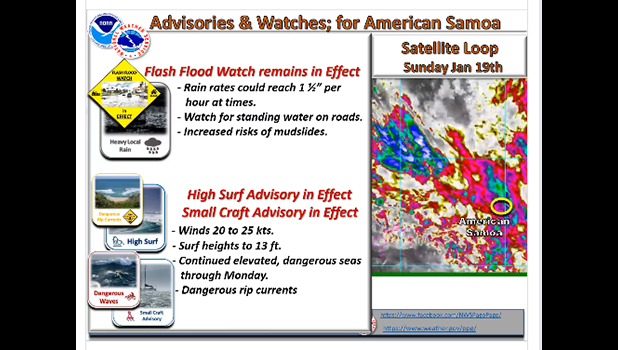 Pago Pago, AMERICAN SAMOA — Periods of rain will sweep across the American Samoan Islands through Sunday evening. Some locally heavy rainfall is possible. Watch for continued risk of mud and landslides, along with water standing on the roads. Additionally, elevated surf with generate some dangerous rip currents and seas through Monday.

Flash Flood Watch continues for all islands of American Samoa through Monday Night. An active monsoonal trough will shift along the islands to continue bringing occasional showers with periods of heavy rain and embedded thunderstorms. As grounds are saturated from previous showers, it is likely that there will be landslides, mudslides, flooding in flood prone areas.

HIGH SURF ADVISORY IS IN EFFECT

Surfs of 11 to 13 feet will continue to impact north facing shores due to large northerly swells through Sunday night Impacts include large surf and strong rip currents.

A SMALL CRAFT ADVISORY IS IN EFFECT