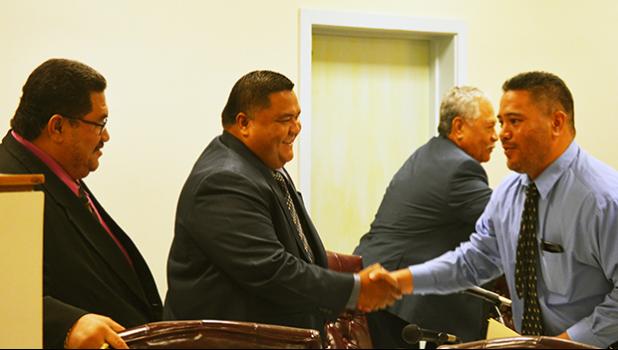 Pago Pago, AMERICAN SAMOA — Vice Speaker of the House Fetu Fetui Jr believes that the government’s decision to search vessels and flights from Manu’a for illegal drugs is not only illegal but it violates people’s constitutional rights under the Constitution and the laws of American Samoa.

The former police officer said during a House hearing last week that if this is the government’s decision to search vessels and flights from Manu’a everyday, the government must also search buses carrying passengers from East and West of the territory.

A House Government Operations Committee hearing, chaired by Rep. Vailiuama S. Leasiolagi was called last week to discuss the issue on how illegal drugs are entering the territory while our borders have been closed for over 5 months now, as raised by Fofo Representative Andra Samoa in the chamber last week.

Those who appeared before the committee to testify on the hearing include Chief of Customs Office, Elisara Pita Elisara; Director of Port Administration, Taimalelagi Dr. Clair Poumele and Deputy Treasurer, Keith Gebauer.

Samoa told witnesses that the issue about illegal drugs entering our borders was mentioned by Police Commissioner Le’i Sonny Thompson during a House hearing last week, where Le’i stated during his testimony that illegal drugs are entering through mail, container vessels, cargo flights or on persons.

Samoa also recalled part of Lei’s comments where he stated that Customs is the front line at the entry points and police perform their investigations after cases are handed to them by Customs. And after police investigations, cases are forwarded to the Attorney General’s Office for the final process.

The representative from Fofo stated there are almost daily reports in the newspaper about suspects caught with drugs being arrested and prosecuted. She said the sources of drug supplies in the territory are well known as they are mentioned in the newspaper reports of drugs cases. These are Aute and Filifili.

She pointed out that it’s going on to 5 months since our borders have been closed  due to the Coronavirus restrictions, but its seems to her that the drug problem in the territory is getting worse and worse.

When Samoa asked the witnesses if anyone could explain to the committee the screening process when cargo containers arrive at the port before business owners are given the okay to open their containers and release their goods, the deputy treasurer stated that their screening process involved both the scanners and the inspector to make sure all items declared on the list (invoice) match the items inside the container.

Gebauer said the Customs Chief has set operating procedures for the release of all incoming containers to make sure nothing illegal is entering our borders.  The importer must declare what is in the container, paying duty and inspection fees with Customs before Customs deploys their inspectors to do the scanning and physical inspections and review the documents provided by the importer.

“… When Illegal contraband and drugs are discovered, Customs has procedures for that as well,” Gebauer told the committee.

He further stated that by statute, Customs is there to help secure our borders and collect any revenues that are due from the port, airport, the inter-island wharf and the post office.

“We continue to try our best … to stop illegal drugs from entering out borders,” said Gebauer, who added that the “drug pandemic is never an easy task and we do whatever we can do to combat the drug problem and stop those who are trying to smuggle these illegal drugs into our territory.”

He also stated that as long as there is a demand on the island, those that are on the street smuggling illegal drugs would continue to find ways to bring drugs into the territory.

Rep. Vesi Talalelei Fautanu Jr said, “Corona is an invisible virus we can cure, but drugs are a visible virus … we’re still try to find ways to cure it,” adding that “maybe the Fono needs to pass legislation to try to cure the drug virus.”

Vesi said that one of the big problems our government is facing right now is people who don’t want to reveal to law enforcement what is going on around us. He stated that the drug problem started up with marijuana, but right now, we’re moving up to methamphetamine and many other types of illegal drugs.

“Where are these people getting these illegal drugs?” asked Vesi, who then said that Customs and Port Administration need more resources in order for them to deal with this drug problem.

Gebauer responded by saying that despite the fact passengers are not allowed back into the territory at this time due to the COVID-19 restrictions, our borders continue to be open by allowing cargo ships to bring in goods and flights which bring in cargo.

“Different types of illegal drugs are already here in our territory. Some are imported in while some are locally grown,” said Gebauer, adding that drugs are a benefit business.

“When those involved in this business see that one way is closed, they will find another way to bring drugs in. It’s a continuous battle and we are facing our own version of this problem.”

Gebauer told committee members as they read the newspaper everyday, they can find out what is happening in our community.

Swains Representative Su’a Alexander E. Jennings asked the witness if they have any cases involving drugs coming into the territory while borders are closed down. Gebauer replied, “Yes.”

“I don’t know what information you’re trying to hide from the committee and the public. This is public information,” said Fetui Jr.

Gebauer responded that Public Law 34-19 allowed Customs to conduct inspections on any incoming vessel from port to port within American Samoa. He further stated that there is legislation on the scanner operation.

“I think you’re violating people from Manu’a’s constitutional rights. I think you are. If this is how you interpret the law, then you also need to search buses carrying passengers from East and West of the island, if you’re looking for illegal drugs,” Fetui Jr told Gebauer.

The deputy treasurer replied by saying that they’re only following what the law allows them to do. On the idea of searching buses, Gebauer told the Vice Speaker that is considered ‘domestic’ and that is not covered under the Public Law. He further stated that they also consult with the Attorney General to make sure they are following what the law says.

Fetui Jr. told Gebauer that the law is clear. If someone is under suspicion for bringing illegal drugs from Manu’a, the law says, search that person.

“Once the search is over and nothing is found, the law says a second search of the same person is illegal,” said Fetui Jr, who added that he understands very well about the law because he was trained as a cop.