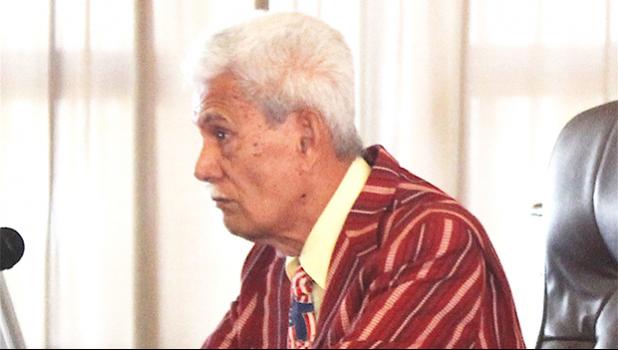 Sen. Fonoti Tafa’ifa Aufata was the lone opposition vote on a measure, which gives the Fono authority to override the governor's veto. The proposed amendment to the Constitution now goes to the House for consideration.

The Senate Joint Resolution was approved (14-1) during third and final reading on Monday.

At last Friday’s session, after the measure was approved in second reading, Fonoti asked that her “no” vote, which was carried out by a show of hands, be recorded in the daily Senate journal.

She argued to maintain the status quo, which was set up by our forefathers and therefore shouldn’t be changed.

The Senate's final vote followed two Senate Rules Committee hearings, including one last Friday for the public to provide testimonies. Only Pulu Ae Ae Jr. showed up to share with senators what the public is looking for, but he ended up being questioned by committee chairman Nuanuaolefeagaiga Saoluaga T. Nua.

Pulu didn't hold back. He publicly claimed that there are problems in government —including the Fono — and senators are fully are aware of them. He however declined to go into detail, out of respect for the “Tama o le Atunu’u”.

Pulu, who heads Congresswoman Aumua Amata’s District Office in the territory, testified as a private citizen and informed senators what many in the community have shared with him — people are afraid, reluctant and uncomfortable testifying before senators in the Senate chamber. Pulu suggested taking the issue to villages so the community can freely voice their views.

His testimony is the same view several residents have shared with Samoa News, which reported last week about the public hearing. Residents who contacted Samoa News said they prefer offering testimonies at the village level, where they can speak freely.

At the committee hearing, Pulu said this is the fourth time the veto override has been discussed and he believes many people don’t fully understand its importance.

Nuanuaolefeagaiga wanted to hear Pulu’s personal view on the measure, and that resulted in a back-and-forth Q&A between the pair that lasted about 15 minutes.

Pulu shared what he calls his honest opinion, saying he is looking ahead to the future of American Samoa and its relationship with the US government. He claims this is the only direct connection that American Samoa has with the feds, and that is the line-item veto, which gives the authority to the US Interior Secretary to make the final decision on the governor’s veto of a bill passed by the Fono.

If it is removed, Pulu said the feds might think American Samoa wants to oversee its own government.

Nuanuaolefeagaiga interjected and asked if it isn’t the federal government's wish for American Samoa to conduct its own affairs when it comes to territorial government.

Pulu reiterated that this is the only connection with the feds and if the feds want American Samoa to handle its own government, “the question is, ‘are we prepared to do that’?” he asked, adding that in his own opinion, American Samoa is not prepared.

Nuanuaolefeagaiga again interjected saying that it is his belief that the government is on solid ground and doing well without any problems (leai ni fa’aletonu), and the only fa’aletonu is the Fono’s override authority of the governor’s veto, which the Fono does not have.

He asked if Pulu was aware of any bill sent to the Interior Secretary, who then made a decision to override the governor’s veto. Pulu responded that perhaps it may have been done years ago, during the early time of the American Samoa Government when the governor was appointed by the US President.

As to Nuanuaolefeagaiga’s comments that there are no problems — “leai ni fa’aletonu” in government — Pulu said he doesn’t want to share public details of what he says are problems, adding that if he speaks about such problems, senators wouldn't want to hear them.

Nuauaolefeagaiga interjected again, saying that if there are problems, those are particular to an individual but not the Fono nor the government, which is solid and moving forward. That prompted Pulu to react with a short-laugh response.

The committee chairman said only one bill was sent to the Interior Secretary for a decision on the governor’s veto, but up to now there is still no reply. Nuanuaolefeagaiga didn’t provide any other details on the matter.

Gaoteote said this is an important issue to review now, for future generations who will be taking up seats in the Fono. He then agreed to dismiss the witness.

In his parting remarks, Pulu made clear that he is not against the measure, which he supports, but the final decision rests with the Senate. He asked for forgiveness if he said anything wrong, but added that he didn’t want to publicly share what he knows are the problems in government.

After Pulu left the chamber, the committee moved to debate the measure, with some senators voicing their disappointment with Pulu’s statements regarding alleged problems in government, without any proof.

If the Fono approves the measure, there will be time before the November 2018 election to conduct public awareness activities to explain to the community the importance of the Fono’s override veto authority, according to the committee.