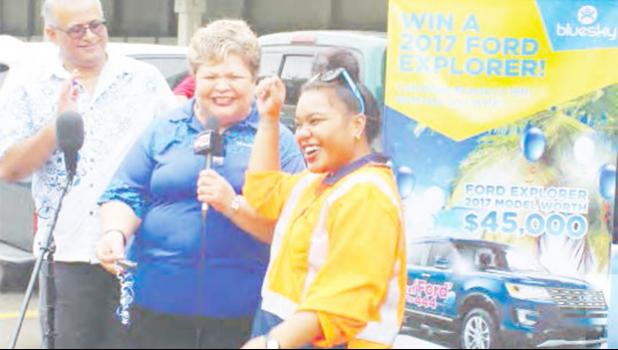 Vaitogi resident, Fontela Faifaimalie (far right) raising her hand and sounding o a loud cheer, after officially being declared by Bluesky official, Sherry Sele (middle), as the winner of a 2017 Ford Explorer — part of Bluesky’s 18th birthday celebration give- away — during Saturday’s presentation at the Laufou Shopping Center. At far le is Bluesky American Samoa acting Country Manager, Raj Deo.

Last Friday morning was the drawing — using the True Random Number Generator on www.random.org — and it was open to the public, the media, and was streamed live on Bluesky’s Facebook page. There was also a police officer present to oversee the event.

The number drawn was matched to a cell phone number registered to Marieta Manase. However, there was a bit of confusion. Sele called the winner’s phone number and the telephone conversation was put on speaker for all to hear. The female voice on the other end of the line, when asked by Sele, if this “is Marieta Manase”, first said the caller had the “wrong number” and then acknowledged knowing Manase.

She noted that the number was “registered under Marieta Manase. But as it is common practice on island, we give our SIM cards to our friends, our neighbors, and that was the situation with Fontella. Her mom bought the SIM card from Marieta Manase, and we had to iron that out [last Friday]”.

The Ford Explorer promotion, according to Sele, “is our way of celebrating our 18th anniversary. It’s not an easy feat, [but] we would not have done it without the support from our customers and it’s our way of saying thank you and we look forward to continuing our service [for] another 18 years.”

Sele said the car’s market value is $45,000; however, release of the vehicle to the winner is contingent on paying upfront to ASG the tax, which is 28% of the total value of the prize — which was paid by Bluesky.

“So in reality, you’re getting $60,000” worth of the winning prize, Sele informed Faifaimalie, who cheered aloud, along with members of her family and co-workers from McConnell Dowell who were at the event along with three ASG Tax Office officials.

In her brief remarks, Faifaimalie thanked the Bluesky family for the new car, and described the promotion as an “awesome opportunity.”

After the key and the car were officially handed over to Faifaimalie, she drove the vehicle around the Laufou parking lot, honking and cheering.