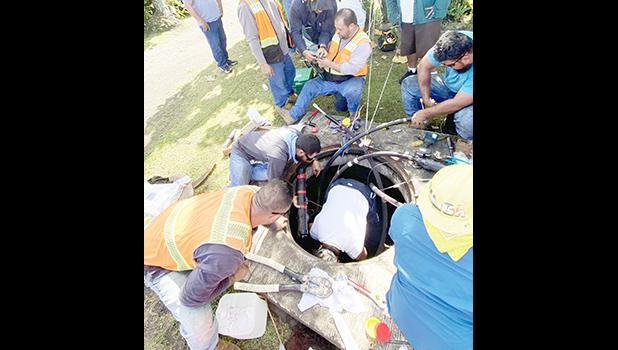 Pago Pago, AMERICAN SAMOA — American Samoa Power Authority (ASPA) executive director Wallon Young confirmed over the weekend that last Friday’s power outage, affected the entire island of Tutuila and provided an explanation as to the cause of the outage, which occurred around 7:48a.m.

The islandwide power outage happened as many of the local workforce were arriving at work, or on their way to work, and schools was just opening that day. The outage also interrupted cell phone service as customers were trying to reach others.

And due to the power outage water wells and the water system were temporarily without power. ASPA water crews worked to restore water pressure to areas impacted by low to no water pressure when power came back on.

Responding to Samoa News inquiries on Saturday morning, Young provided information from the “initial report” of the power outage.

Regarding the cause of the outage, he explained that a phase to phase cable fault on the 34.5KV Transmission line and the failure of the Supervisory Control and Data System (SCADA) for the Satala power plant “occurred simultaneously”.

Furthermore, the Programmable Logic Controller (PLC) for the SCADA System had failed — “beyond repair”; and “this resulted in the automatic shutdown of the Satala power plant which was operating in auto mode.

According to the executive director, the Satala Power Plant is now operating in manual mode and this will continue until a replacement PLC  for the SCADA system is installed and tested. Additionally, an emergency order for the replacement PLC was made last Friday afternoon.

He explained that the phase to phase fault on the transmission line was located and repaired by 2pm Friday, so the line was returned to normal operations at 6pm that day.

The initial report, shared by Young, provides details of power restoration. For the Satala Feeders:

Feeder-8 - from the Satala plant to the LBJ hospital area - was restored first at 7:50 am

For the Tafuna power plant feeders:

“ASPA sincerely apologizes to its customers for the unplanned outage and any inconvenience caused,” Young said.

ASPA kept the public informed on the updates as the power was been restored, posting information on its Facebook page — which is also an avenue that the power authority has used in the past to keep customers informed of water shut offs and other important power and water issues.