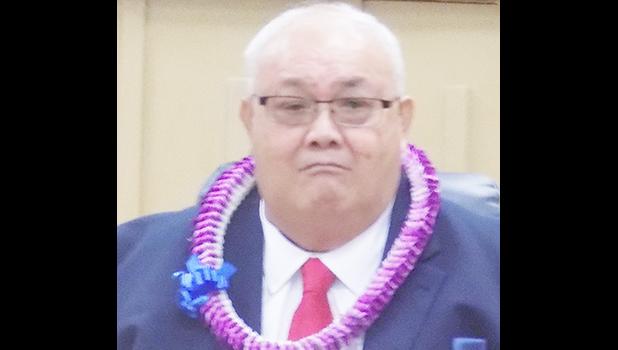 Pago Pago, AMERICAN SAMOA — The fono took an unusual step for voting a Governor’s nominee this week when the House of Representatives approved acting Police Commissioner Lefiti Falelaulii Pese by a public show of hands instead of a secret ballot. The vote was 17-0.

Before the nominee entered the chamber, Faipule Faimealelei Anthony Allen proposed a motion to waive Lefiti’s appearance and for the committee to approve his nomination without his presence. The motion was seconded, then was immediately put to a vote and passed.

Vice Speaker Fetu Fetui thanked Faimealelei for the honor afforded the Faatui or titular head of Manu’a. However, Faipule Manumaua Wayne Wilson pointed out that it was unprecedented for a nominee to be approved without a confirmation hearing.

In reference to Manumaua’s statement, Fetu said that he had anticipated such comments. He then proposed an amendment to Faimealelei’s earlier motion, which had been approved. His new motion was to bring the nominee before the committee, and for the House Speaker to be given the opportunity to make the final decision.

Fetu recalled other paramount chiefs of Tutuila and Manu’a who also appeared before the House chamber for their confirmation hearing including Lefiti. He said Lefiti appeared twice before this chamber but Paramount Chief Mauga Tasi Asuega had appeared three times.

House Speaker Savali Talavou Ale said the cabinet nominee should appear before the committee as is the usual practice for confirmations.

Lefiti said it was an honor for him to be chosen by Governor Lemanu Peleti Mauga to be the father of the public safety arm of the executive branch. He expressed his appreciation to the governor for having confidence in him to take up this position. He declared that in his 52 years of service in the government, he has never broken a law. Lefiti told the committee that if there was any member with doubts about his nomination, he would try his best to address their concerns.

House Speaker Savali said in response that while the House had rules for confirmation of executive branch appointees, he and fellow representatives could sense this was a special occasion and unique appointment — having a matai of Lefiti’s status take charge of the territory’s public safety.

He added that the House would have an opportunity to question Lefiti about the operations of DPS at a later time. With that the Acting Commissioner was excused.

And he didn’t have to answer any questions as none were asked during his 15 minute appearance before the House Public Safety Committee. The House chamber was packed with family members and supporters.

Lefiti faces a confirmation hearing in the Senate tomorrow.

In a Feb.12th memo, the governor appointed Lefiti Falelauli’i Pese as Commissioner of Public Safety and he shall exercise the authority necessary to discharge the duties and general responsibility of the police commissioner.

Lefiti was among the 159 passengers who were quarantined for 14-days at Tradewinds Hotel and finally released last week to join their families.