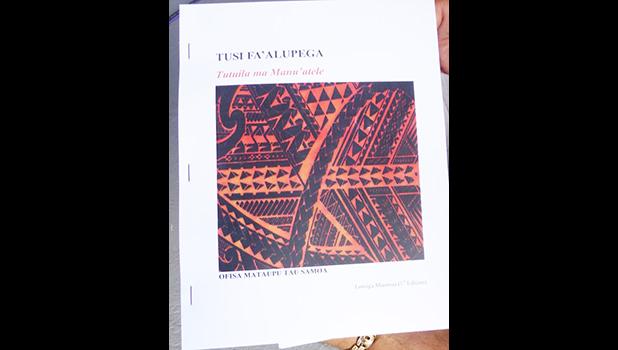 Senators say book had no input from traditional leaders in the Senate
By
Fili Sagapolutele
fili@samoanews.com

Pago Pago, AMERICAN SAMOA — Through a Senate Resolution, senators requested that Gov. Lemanu Peleti Palepoi Sialega Mauga as well as Secretary of Samoan Affairs Mauga T. Asuega retrieve all copies of the Tusi Fa’alupega — Book of Salutations — or portions of that which were released to the public.

The non-binding resolution, approved by the Senate last Thursday, also requests that the governor, Mauga and Samoan Affairs get the committee that oversaw the book project to refrain from further distribution of the Tusi Fa’alupega and bring all writings intended for publication to the Senate for assessment, correction and approval.

The book project, an initiative of the Lolo Administration, with funding from the US Department of Interior’s Office of Insular Affairs, was officially launched on Dec. 31, 2020. Then-governor Lolo Matalasi Moliga directed that copies of the First Edition be made available to the American Samoa Community College ASCC and the Education Department for teachers and students. (See Samoa News edition Jan. 4, 2021 for details.)

Two days after the current 37th Legislature convened on Jan. 11, 2021, concerns and criticism of the Tusi Fa’alupega waere echoed by senators who spoke during the Senate session, with Sen. Tuiagamoa Tavai saying that he has heard that this book has been launched and made available without input from several traditional leaders in the territory.

Other senators also raised concerns about the book, which they claim is incorrect or incomplete. Tuiagamoa led the call for a Senate Samoan Affairs Committee hearing on the book and this was supported by many senators including Sen. Satele Galu Satele Sr., who pressed for a hearing so that witnesses can provide details of how this book was launched without input from traditional leaders in the Senate.

During the committee hearing and afterwards, several senators noted their concerns with the interpretation of the Tusi Fa’alupega, which has been rejected by several traditional leaders as incomplete or incorrect.

The Senate Resolution was the result of the Jan. 19th Senate Samoan Affairs Committee hearing on the book.

According to the resolution, it was learned during the Senate committee hearing that a portion of the book has already been distributed to the relevant professors at ASCC and high school Samoan culture teachers to assist them in classroom instruction.

Individual senators voiced their disappointment that they, as representatives of their districts, were not consulted for their input, as they and other elders of their villages are the most versed in their village and district salutations.

The resolution states that in the aftermath of the hearing, the Fa’alupega book committee promised to recall all the portions of the book that were distributed, refrain from further distribution of the book, compile and confirm information in the book with villages and districts, and bring copies of the book to the Senate for changes and approval before its final publication.

The resolution also requested that Lemanu support funding of the publication of the book since it was a project initiated by the former governor and Lemanu, who was lieutenant governor at the time.