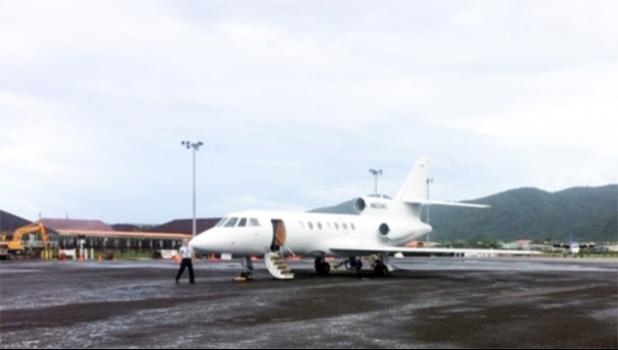 They are here to make emergency repairs to production line
By
Fili Sagapolutele
fili@samoanews.com

Pago Pago, AMERICAN SAMOA — Three engineers for StarKist Co., arrived this past Saturday morning on a private jet, which took off from Honolulu, and were briefly quarantined at Fatuoaiga, before they later tested negative for the coronavirus and are now staying at StarKist company housing.

Samoa News received information Saturday afternoon that the engineers — who are from South Korea — were brought in for emergency repairs to the production line to ensure the cannery remains operational.

Among the conditions for the engineers’ entry was that they obtain health clearance in accordance with local COVID-19 regulations put in place early last month that shows travelers from Honolulu have proof that they tested negative for the virus.

The engineers were tested and brought with them the health clearance showing they tested negative; but Health Department officials reportedly raised questions, especially since they were not informed by the governor in advance of this entry.

Later Saturday morning, the engineers were taken to Fatuoaiga for quarantine and by Saturday evening they were tested by DoH and the results were negative. The engineers were then transferred to the StarKist housing in Atu’u where they are not only being monitored by DoH but also StarKist Samoa — in accordance with the company’s plan submitted to the governor.

He explained that StarKist requested to be allowed to bring its 3 engineers in to conduct emergency repairs. “As a condition to their entry these 3 individuals were to be tested before they would come down. These tests were done. So a private jet brought these 3 engineers,” he said, noting that there were no other travelers on the plane other than the 3 engineers.

According to the task force chairman, StarKist assured the governor that they would monitor the 3 engineers like they do for their 2,500 employees as their commitment to adhere to company advisories and guidelines given to the American Samoa Government.

Gov. Lolo Matalasi Moliga spoke briefly about this matter during the task force meeting Sunday and aired late Sunday night on KVZK-TV. The governor explained that the StarKist request was submitted directly to him and approval was later granted after being reviewed by the Attorney General’s Office to ensure it met all local COVID-19 regulations.

Lolo acknowledged that there were email communications between those involved in ASG on this matter, but didn’t elaborate further. He did commend DoH and its physicians for doing their due diligence role — checking that all travelers entering the territory comply with local regulations.

The governor said he got busy after getting the request Wednesday, heading into Thursday and Friday — with the Flag Day 2020 activities and wasn’t able to get the word out directly to DoH and local Homeland Security Department. He noted that there was a break-down in communication, which started from him.