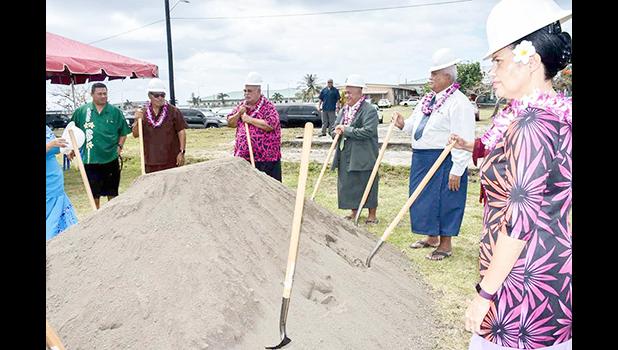 Pago Pago, AMERICAN SAMOA — Gov. Lolo Matalasi Moliga (second from left) along with others, during last week’s groundbreaking for the government’s long awaited Tafuna Community Center, which will come under the jurisdiction of the Department of Youth and Women’s Affairs.

The proposed structure will be constructed over the area that used to house the VA buildings next to South Pacific Academy, and will also extend on to the OMV track. Part of the site development includes the installation of 47 parking spaces.

The project, according to the Governor’s Office, includes construction of a covered play court gymnasium which will be used for indoor basketball, and volleyball, and will feature a tennis court.

The proposed structure will be a reinforced concrete building with metal roof framing and 24-gauge Trimdek metal roofing. The building will be 200ft x 120ft and two-story at end bays. It will include a weight/exercise room, training and conference room, kitchen, as well as bathroom facilities and offices on the ground floor. The second floor will feature concrete bleachers, offices, and bathrooms.

The contractor for the project is Nana’s Incorporated to the tune of $2.69 million, funded by money from the federal Capital Improvement Project (CIP), according to ASG information.

There’s been no word yet on when the actual construction work will commence. The OMV track is highly utilized by members of the community, with residents using it to exercise during early morning and late afternoon hours.