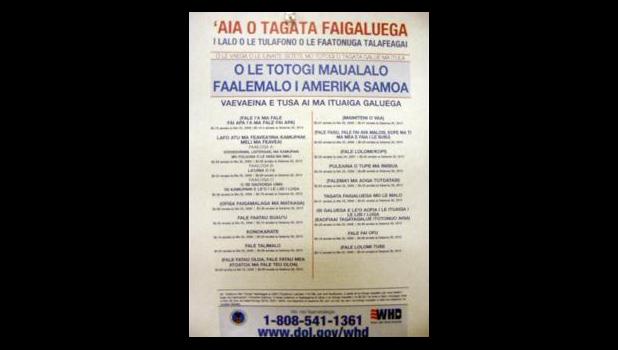 The US Department of Labor’s Wage and Hour Division has completed what USDOL officials are calling a “historic” move: translating into the Samoan language important materials dealing with wage and hour issues, including the minimum wage listings for American Samoa.

Wage and Hour Division (WHD) director of the Honolulu district office, Terrance Trotter and two other USDOL officials were in the territory recently to meet with local employers and others about the materials being translated into Samoan.

“For us, it’s a historic visit. It’s the first time we’ve really been able to translate from the English language into the Samoan language—for example—the minimum wage poster,” Trotter said in a Samoa News interview last Thursday.

American Samoa is the only US jurisdiction with 18 different minimum wages based on industry classification, and USDOL translated into Samoan all minimum wage levels by industry. The minimum wage poster translation also includes in Samoan a small portion of the Fair Minimum Wage Act of 2007, which raised the minimum wage.

Another Samoan translation is Fact Sheet 44, titled “Visits to Employers”. Trotter says this document explains what happens when a WHD investigator visits an employer, as well as the process of an investigation; how employees are impacted; how employees participate in an investigation process; and how the determination is made as to whether the employer is in compliance or non-compliance.

For example, “How do you know if they (the employer) is counting my time correctly? What happens if I eat and work during lunch time and the employer automatically deducts half-an-hour meal break — should I be paid for that? How do you count pre-shift work preparing my station, which I’m required to do in advance of my work if I work at a factory?” said Trotter.

“These are all compensable time, and what we’re trying to do for the local community and even for people coming in from independent Samoa, where Samoan language is the primary language of communication, is translate it so they can understand,” he pointed out.

“We just wanted to make sure that his constituents have a better understanding of the law, and perhaps even find a disbursement point [in Samoa] prior to entering American Samoa. So we feel that’s important,” he said.

(Samoa News points out that this is especially important due to the large workforce coming from Samoa for the local canneries.)

Trotter says this is the USDOL’s first attempt in translating material into the Samoan language and “there might be some mistakes and better grammar to be used, but we’re going to improve it.”

In fact, he noted, “We expect to always improve it” with better Samoan grammar and language.

Asked what prompted USDOL to translate these materials, Trotter said he felt that it was important to provide “resources” after he had made a commitment for WHD to remain in the territory.

Also, he noted that after investigators were done with interviews, they would say ‘I’m not really sure they understood my questions very well’, or ‘do they really understand what I’m trying to communicate to them?” And maybe there was “some lack of fluency, perhaps, in how we’re trying to explain something,” had added.

“So I thought, ‘what we really need to do at some point is, translate these materials into the language that they use every day, and it would help my long term goal of educating the community,” he said.

“I think when you empower people with knowledge you can grow the level of compliance in the community, because when people know what their standards are, they can bring it to the attention of their foreman, or their supervisor, or the employer and take the necessary steps to remedy it— or call us for resources to follow up,” he pointed out.

“It’s just one more way of helping people - especially since we’re removing that screen to understanding, (the English language) and trying to get to them as directly as possible to know what the law says regarding their base line entitlements,” he said.

Asked what he hopes employees will gain from getting this material translated into the Samoan language, Trotter responded, “I think if all of us know, for example, that ‘I have to get paid for all of my hours worked’ — it helps.”

For example, “people may think that the custom is, ‘if I eat at my desk in an office and as long as I’m eating they can deduct my lunch [break], even if I’m answering the phone. They may have not known, that actually counts for hours worked — even though it’s lunch time, if you’re working while you’re eating,” he said, adding that a general understanding of the law “helps us create a more compliant atmosphere.” - See more at: http://samoanews.com/content/en/samoan-version-minimum-wage-facts#sthash...